A selection of highlights from the 2018 Classic Motor Show 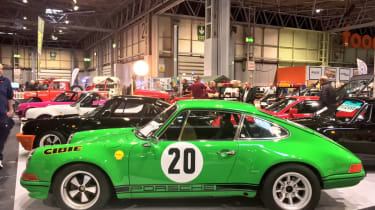 One of the year’s biggest classic car events took place this weekend at the NEC in Birmingham, and evo went along to absorb the atmosphere (or is it fumes? Probably fumes) and see whether anything caught our eye.

We’ve visited the NEC Classic Motor Show before, and it seems to grow in scale every year - if it isn’t already larger than when Birmingham used to host the full British Motor Show, then it can’t be too long until it is.

It’s probably getting on for being more expensive than a trip to the British Motor Show ever used to be too - if the entry ticket didn’t sting enough, then try the £16 they’re now asking for parking - but the lighting’s better these days and there are bargains to be found in the trading section, so it’s worth a look if you have a project on the go. 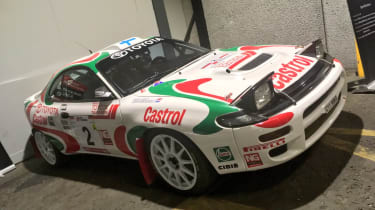 The best news is that the variety seems to get better each year, with more clubs represented and, as “modern classics” become more widely appreciated, a better selection of the kind of cars you’re likely to find now and then in the pages of evo, from that 1980s, 1990s and early 2000s sweet spot of sports cars and hot hatchbacks.

One such car is the original Porsche Boxster, now over 20 years old, and Porsche’s own stand had sizeable grid of the cars all in racing trim and painted in various well-known Porsche racing liveries. 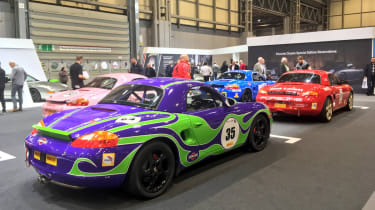 Older Porsches were of course easy to find at the show too, as were celebrated examples from Ferrari, Lamborghini and several other high-end manufacturers. Our own highlights included the appearance of a Toyota 2000GT - examples of which now reach seven-figure sums at auction - as well as a healthy Alpine stand (bolstered by an example of the latest A110) and Nicky Grist’s old Group A Toyota Celica, hidden away in one of the corridors connecting two halls.

Click on any of the pictures above to be taken to our full gallery from the event, and remember to follow evo’s Instagram account to keep up with our images on a daily basis.