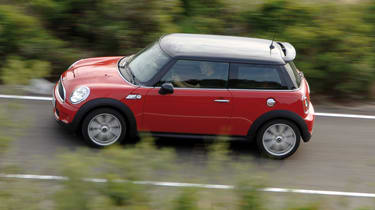 A few months back I had bit of a prang. You may have seen the end result, and read about me knocking Team Propellerheads out of the Grand Challenge.

It was a very gutting moment. In nearly five years of driving I’d not had a crash, or even come close to one, so haphazardly writing off a BMW was a big shock. My next move was clear – get some advanced driver training.

My plan is to try out a few different options, and after sampling a day with CAT Driver Training I headed to the expertise of Cadence and its head honcho Hugh Noblett.

For strengthening my confidence behind the wheel, there seems few better people. Hugh has an abundance of experience and he spent a number of years as an instructor at the Metropolitan Police Motor Driving School in Hendon. A lot of his course centres around the teachings of Roadcraft (the police driving bible) but his aims aren’t to stifle enjoyment; driving enthusiastically and skillfully is something Cadence promotes.

My half-day road training used two vehicles – in the front-wheel-drive corner, the Mini Cooper S, and in the trickier to master rear-driven corner, an E36 BMW M3.

We began in the Mini, with Hugh and fellow instructor Mark Coaten sitting in the car while I went on a typical drive. There was no instruction, simply the pair of them picking up what I did right and what needed improving. The feeling of being watched over, especially by two people, was odd and more than a little nervy at first. After a couple of hours driving, though, it was time for lunch and a chat through observations that’d been made.

My biggies? Well, carrying a bit too much speed into corners (a first clue to how my mishap may have occurred), adjusting the throttle during cornering (a second clue) and my vision. The latter was simply a case of not looking far enough ahead. My vision going into the day tended to lead from the windscreen and up a few car lengths ahead. Since sitting in with Hugh and Mark, it now leads from practically the horizon back to me. A weird one to get used to, but so much more helpful in anticipating what’s about to happen, and reacting to it.

After picking up on a few areas to improve upon, we headed out in the M3. An enormous sense of déjà vu set in – the interior, engine note and feel of the car very much echoed the E30 325i I’d had my accident in. That car’s snappy back end had cruelly exposed my lack of skill, so it was a big moment stepping into its younger, quicker brother.

We followed a similar route to the one I’d driven in the Mini and I learned how to corner a rwd car with no (or little) throttle adjustment. Previously I would lift off, even if only marginally, in corners without thinking too much about the consequences. It’s a key flaw which Hugh and Mark dug up and then had me working upon.

The Cadence M3 is a fantastic thing and I really settled down with it, really enjoyed driving it, and by the end of my session was hustling it along quite quickly. I didn’t want to get out! That’s probably testament to how much my confidence increased.

Upon leaving I got a copy of Roadcraft, which is stuffed to bursting with Police driving techniques and exercises. My task is to get going with these and keep on improving my driving; it’s a long journey, says Hugh. It should be a fun one, though…