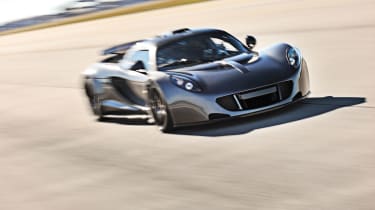 So the Venom GT’s ballistics are gloriously, mind-bendingly absurd. With 1244bhp to propel 1244kg that’s hardly a surprise. But without wishing to get all worthy on you, what we’ve flown 5500 miles to discover is whether it can deploy such rampant firepower with any degree of sophistication, and to see if it can convincingly string together the endless assortment of corners, crests, lumps and bumps that constitute the public highway. The watch might be the ultimate arbiter of outright performance, but the road is the only barometer of outright capability.

When you stray off the interstate that passes Hennessey’s workshop doors, you find near-deserted roads running through an apparently endless expanse of flat, scrubby grassland. The sheer size and steam-rollered topography of this gargantuan state means there’s a distinct lack of European-style rough and tumble to the roads. For a moment I fear our questions will remain unanswered, but as promised, Hennessey’s test route strays way off the beaten track and features fast sweeping curves, inviting esses and some 90-degree lefts and rights. It’s not exactly the Modenese hills, but it’s reassuring that Hennessey has brought us to the trickiest roads it knows.

Those encouraging first impressions formed at Ellington Field soon crystallise into a genuine sense that this is a very well-sorted car. The clutch is undeniably hefty, but the modest travel and surprisingly smooth take-up mean it’s easy enough to master. The big V8 has keen throttle response, but as long as you’re positive and reasonably sensitive you can pull away cleanly, and there’s so much torque that low-speed manoeuvres can be done by nudging around at idle. Steady driving in first or second gear needs a careful right foot as you can induce a sequence of kangaroo hops if you’re clumsy with your throttle inputs, but otherwise the Venom GT is tolerant and well-mannered. 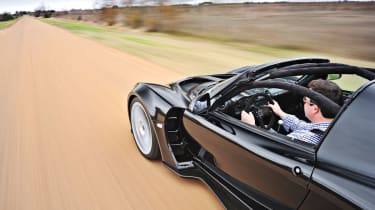 Like the clutch, the gearshift is sweet and positive. Things tend to happen pretty fast on full-boost so you don’t want to have to think the lever home during rapid cross-gate shifts. It’s got a longish throw, but has steadfast precision and consistency no matter how hard you’re being battered by accelerative G. This Ricardo-built transmission is surely one of the best manual ’boxes ever made, not only for its shift quality, but for its ability to take as much as 2000bhp without complaint or need for internal strengthening.

The Brembo carbon-ceramic brakes – so strong and confidence inspiring when hauling down from 200mph+ at Ellington – have real finesse and a level of feel, progression and precise modulation that puts Lamborghini’s binary stoppers to shame and rivals Porsche, Ferrari and Aston Martin for the best carbon-ceramic set-up. Whether you’re brushing them or stomping on them they always seem to deliver just the right amount of braking effort.

True to Hennessey’s ‘keep things simple’ mantra, the Venom GT’s suspension shuns trick electronics and active damping in favour of passive dampers and coil springs. They give the  Venom tight body control with a no-nonsense ride that’s both firm and settled. Some of the busier surfaces on the route are pretty nasty, but the Venom’s composure remains intact. Of course, with almost 1200lb ft of torque if you hit a sharp bump when you’re fully on the power in a lower gear then the traction control makes the occasional spit and pop, but to be honest that’s wholly reassuring!

There’s true feel in the electric steering (take note, Porsche) so you can load the front end from the moment you turn in and – at fast road speeds, at least – have no qualms about the tail failing to keep up or match the front’s resistance to roll. The steering retains a good deal of its Lotus DNA, especially in the measured way the Venom peels into corners. I’d be lying if I said I’d tried to provoke the Venom GT into any sort of slide but, honestly, cars like this aren’t designed to be thrown around like an M3. Besides, 345-section rear rubber takes some un-sticking, even with an unholy amount of torque. That’s not to say I wouldn’t have a go if we ever drive the Venom on a racetrack…