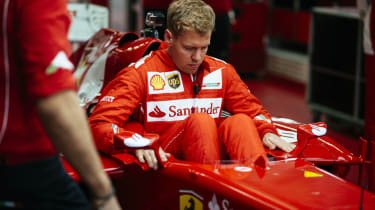 The dust only settled in Abu Dhabi a few days ago, but that hasn't stopped four-time World Champion Sebastian Vettel racing to get his first proper taste of Ferrari F1 power. Slipping into the cockpit of its F2012 racer, the German enjoyed several laps in mixed conditions at the Italian outfit's Fiorano test track.

The ex-Red Bull number one said it felt 'magical' driving for a team he's admired since his youth, even acknowledging memories of ex-Ferrari and seven-time World Champion, Michael Schumacher.

It's not the first time Vettel's right foot has been connected to an engine from the iconic Maranello team, because his debut full season with Toro Rosso saw him drive a V8 engine'd STR3. Fittingly, he won in Italy that year too.

The engine in the back of the F2012 Vettel borrowed here is actually a further developed version of the very same unit, such was the effect of F1's 'engine freeze' regs. Hearing it run again at a grey Fiorano has certainly reminded us how we still quite miss the sound of high-revving, naturally aspirated F1 cars...

That being said, with Fernando Alonso set to go to McLaren, Mercedes' Lewis Hamilton and Nico Rosberg ready for round two and Vettel charged to bounce back from a mediocre 2014 in his new team, 2015 is making all the right noises for being a potential classic already.

Who's your money on to take the 2015 crown? Can Vettel really drag Ferrari back to the front? If Alonso couldn't do it... Let us know in the comments below.