Silverstone Auctions offers two iconic Ferraris at its May Sale 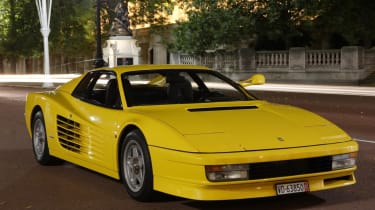 Spandex, cassette tapes and Ferrari Testarossas -  all defining items of the 1980s, and all waxing and waning in popularity according to how fashionable the decade’s style is at any given moment.

Right now, Testarossas in particular are big business, with prices on the rise. Two are coming up for auction at Silverstone Auctions’ May Sale on May 23, and one of which is quite familiar to readers of evo.

That car is a 1986 Testarossa painted a vibrant shade of Giallo Fly, with just 45,000 miles on the clock and estimated at between £80,000 and £100,000. Eagle-eyed readers may note it’s the same car driven by Henry Catchpole in evo 185, albeit photographed here wearing its previous Swiss numberplates.

The car was originally sold in Switzerland and finished in Bianco, but a respray early in its life brought about the current hue. It’s been meticulously maintained, features its original 1980s Pioneer stereo and has a three-piece luggage set – as well as the distinctive single, high-mounted. 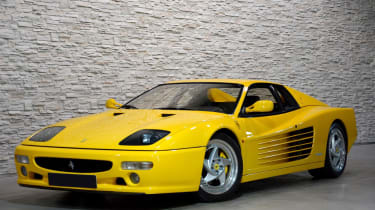 Whether you consider the later F512 M an improvement or not is a matter of personal taste, but the 1994 example also up for sale with Silverstone Auctions has similar impact in Giallo Modena.

Both are sure to retain their appeal long after spandex and cassette tapes have gone out of fashion...