From 250MM to the new 488 Pista Spider, Ferrari has created some incredible cars for sun-lovers over the years. 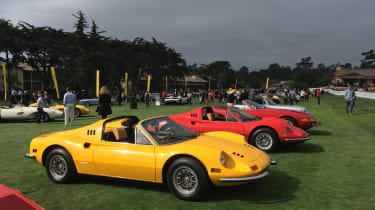 It’s funny how quickly one abandons one’s principles when opportunity presents itself. The convertible Ferrari is one such occasion: You know the coupe will be more rigid, more precise; the true drivers’ car. And yet presented with a twisting ribbon of tarmac under the Californian sun, a fair few of you might quietly pick up the keys to a coupe’s soft-topped sibling for a dream drive.

Admittedly no Ferrari is in its element parked on the green at Pebble Beach, but there are few locations better suited for a celebration of Ferrari’s ‘spiders’.

> Click here for more on the new Ferrari 488 Pista Spider

Centrepiece was the new Ferrari 488 Pista Spider, successor to the much-loved 458 Speciale Aperta. With 710bhp from the Pista’s turbocharged V8, the drop-top is capable of 211mph. We already know the hard-topped Pista is incredible on track, but there’s a nagging feeling the Spider might be the more special on that perfect sunny day.

The newest Ferrari convertible is not without heritage either, as the display at Pebble Beach revealed. Below you’ll find our pick of the best open-top Ferraris, from one of the company’s earliest roofless models to some of its fastest... 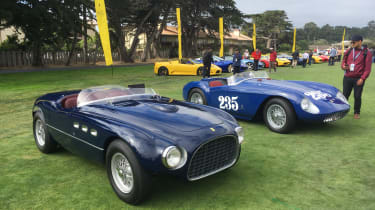 Looking petite among the more extravagent and unusual next to the more familiar Ferraris on the lawn was this dark blue 250MM Barchetta, penned by Vignale. Named for the Mille Miglia, the car’s Barchetta designation also seems appropriate given the chrome coach line running along each side, the distinctive port-hole vents in the front wings, and the rounded tail.

Power comes from a 3-litre, 60-degree V12 producing 236bhp while weight for the Barchetta was quoted at 850kg, 50kg lighter than the Berlinetta. A 150-litre fuel tank gives a clue as to the model’s long-range racing racing requirements. Peering underneath the rear wheel arches the 250’s leaf springs can just be seen, but the gloriously simple cabin is also a highlight. 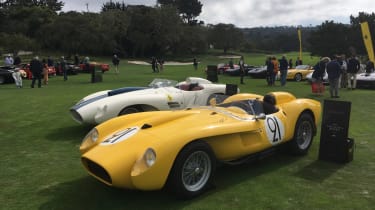 One of Ferrari’s most iconc racing models (and one of its best-known monikers), Testa Rossa chassis 0736 was one of the highlights of the Ferrari Spiders at Pebble Beach 2018. With a history encompassing starts at Le Mans in 1958 and 1959 - though no wins - what it lacks in traditional beauty it makes up for in functional appeal. 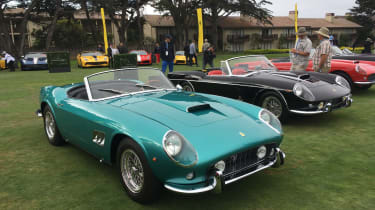 No car is more appropriate for a celebration of open-topped Ferraris at Pebble Beach than the Scaglietti-designed 250 California Spyder. There were several on display, the most eye-catching presented in a stunning shade of teal, offering a contrast with its black leather interior and tan carpets.

Small details - the chrome-bezelled headlights, slanted tail-lights and curved door handles - mark out this car as the later short-wheelbase variant, gaining disc brakes and a power bump to its 3-litre V12 from 276 to 237bhp. These later short-wheelbase cars were said to be more appropriate for racing, though in terms of the long-running 250 line, racing Californias were relatively rare. 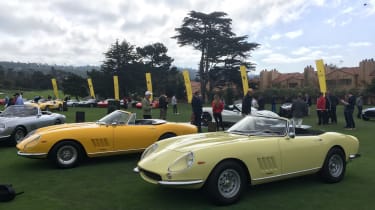 The Ferrari 275 GTB/4 started life as a coupe, but Luigi Cinetti, Le Mans 24 Hours winner in the 1930s and 1940s and founder of the official Ferrari North American Racing Team, commissioned a run of Spyder versions from Scaglietti.

Just ten were built - evident in the price achieved at an RM Sotheby’s auction in 2013 of $27.5 million - at the time, a world record. The example seen here wears chassis number 09437, the earliest in the sequence of NART conversions. Its history is fascinating, having achieved second in class at the 1967 12 Hours of Sebring and subsequently featuring in the movie, The Thomas Crown Affair. 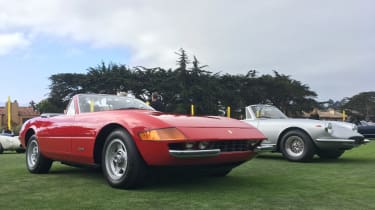 Yet another reworking of a coupe variant by coachbuilders Scaglietti, the 365 GTS/4 wears its open roofline well in the metal - if anything, it’s even more elegant than the Berlinetta. The model was first announced at the 1969 Frankfurt auto salon.

Roof aside, it’s identical to the coupe, featuring the same 4.4-litre Colombo V12 and five-speed gated manual, but considerably rarer - Ferrari made roughly ten GTB/4s for every GTS/4 it built. Appropriately considering the Daytona name, the model was particularly popular in the United States. 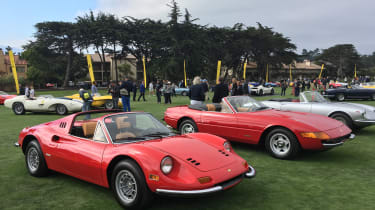 In contrast to the 365 GTS/4, the Dino 246 arguably loses some of its elegance in comparison to the closed-roof GTB, with the coupe’s delicate rear quarter windows making way for a thick vented pillar.

It’s all relative of course, and the 246 remains one of Ferrari’s prettiest models, that removable roof panel also providing greater access to the induction note of the Weber-fed 2.4-litre V6 behind the cabin. The red and tan combination is perhaps too obvious for the Dino’s subtle beauty, but the Campagnolo aluminium wheels couldn’t be more perfect. 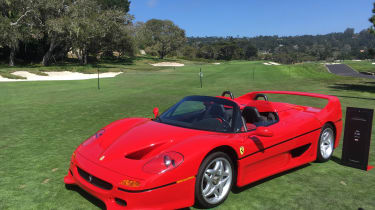 Long-time evo readers will be aware of the F50’s significance. While highly rated from new the model long remained in the shadow of its F40 predecessor, the soft 1990s styling never quite gelling in the same way as the F40’s racing-inspired lines or the pumped-up curves of the 288 GTO before that.

Yet when the F50 met both 288, F40 and the later Enzo in issue 064, we described it as ‘the best supercar Ferrari has made’. Intoxicating, engaging and powered by one of Ferrari’s greatest ever engines - that F1-derived V12 - it has since shone equally brightly in issue 186’s analogue supercars test. More than two decades on from launch the crowds around it at Pebble Beach suggest its star quality has rightly returned. 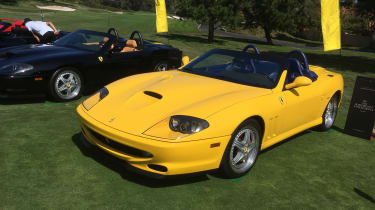 Like the F50, the 550 is another 1990s Ferrari whose time seems now to be arriving. Unlike the F50, the 550 isn’t quite an all-time classic, but it’s still a remarkably satisfying car to drive. It had all the right ingredients: A front-mounted V12, a six-speed, open-gated manual gearshift, 485bhp.

In evo 169 we described the 550’s ‘quick steering, superb brakes, amazing throttle response and an abundance of torque’. All characteristics that also applied to the Barchetta, though this was definitely meant to be driven open-topped – as the rudimentary roof provided by Ferrari was only suitable for 70mph. No matter, as the style is what matters here - even in giallo with blue interior trim. 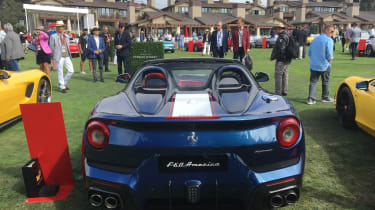 One of the rarest models even in the company of several rare cars, just ten examples of the Ferrari F60 America were built from 2014, based on the Ferrari F12 and designed in homage to short-run American specials like the similarly rare 275 NART.

While its underpinnings were unchanged compared to the production F12 - 730bhp from a 6.3-litre V12 - the bodywork featured several differences, not least the removable-panel roof and twin roll hoops. An asymmetrical cabin design focused on the driver’s seat, with the left-hand side of the cabin trimmed in red rather than the black opposite. At £1.56 million, it cost six times more than the standard F12. 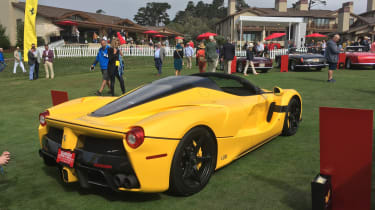 488 Pista Spider aside the newest Ferrari drop-top on display was the LaFerrari Aperta, whose production began in 2016. An invitation-only model, it’s harder to distinguish from its hard-topped sibling than some other Ferrari Spiders of times past, being largely identical up to its removable roof panel.

Nevertheless, Ferrari did make changes to the Aperta’s aerodynamics and structure to account for the option of endless headroom. These included adjusting the radiators to direct warm air under the body rather than over it (a similar solution to BMW’s recent redirecting of air with the i8 Roadster), adding a different opening mechanism for the doors, and laying on the choice of either a removable carbonfibre hard-top or a more traditional removable soft-top.