The story of the Out Run Ferrari

The only official Testarossa Spider 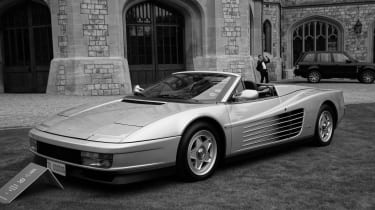 Only one of the following elements from 1980s computer game Out Run was in evidence at Windsor Castle over the weekend. It wasn’t the palm trees, it wasn’t a six-lane freeway, it wasn’t a sky that changed from blue to purple to orange in quick succession and it wasn’t a constant Passing Breeze soundtrack. It was a Testarossa Spider.

It was one of the most amazing cars on display (amongst lots of amazing cars) at the Concours of Elegance, held at the Queen’s home. The car was originally built by Ferrari in 1986 (the same year that Out Run was released by Sega) as a present for Gianni Agnelli, the famously wealthy head of Fiat. It was to celebrate Agnelli’s 20th year as head of the company, but was one of a succession of gifts to thank him for persuading Fiat to take a 50 per cent share in Ferrari at the end of the ‘60s. 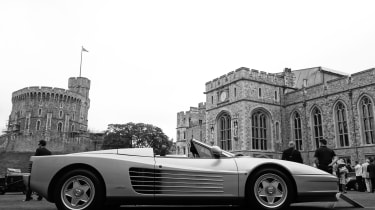 Apparently his name inspired the colour of the car as well as the solid silver badge that replaced the usual aluminium one (if you’re puzzling over that, then take his initials and look at a Periodic Table). There was a mechanical curiosity engineered in specifically for Agnelli as well. In his thirties L’Avvocato (The Lawyer – his nickname) suffered an accident on a road near Monte Carlo that severely damaged his right leg. He had been caught in flagrante with a young woman by Pamella Churchill (who he was then living with) and after a blazing row he was driving the girl home, reportedly touching 140mph in the process, when he hit a lorry. To help with the quirky logistics of driving only with his left leg, a Valeo system was installed in his Testarossa. At the push of a button this system took over the operation of the clutch when changing gear. The same system was fitted, somewhat incongruously perhaps, into the F40 that replaced the Testarossa Spider. 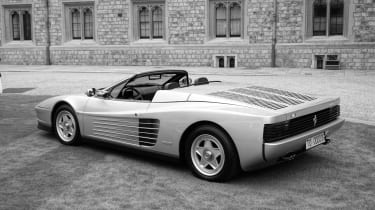 There were many other requests for a Testarossa Spider, but this remains the only one officially built by Ferrari. Some coupes were converted to spiders by Pininfarina (mostly for the Sultan of Brunei), others by German company Lorenz & Rankl and others by California-based Straman (who did the Black car driven by Michael Jackson in a 1987 Pepsi commercial). Most of these unofficial cars have the hump in the middle of the rear deck that you can see in the car in Out Run.

Agnelli eventually sold the Spider to a friend who had admired it and the car was sold at auction earlier this year by Artcurial in Paris (the auctioneer was Hervé Poulain – he of BMW Art Car fame) for just over £1,000,000. It is nice that it has gone to an owner that is happy to bring it out in public, and it was undoubtedly one of my highlights of the Concours of Elegance.