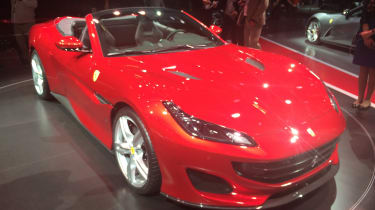 Ferrari recently announced its latest new model, the Portofino, and this new drop-top GT car will replace its entry-level model, the California T. The Portofino was revealed in full for the first time at the 2017 Frankfurt motor show and it will be an important machine for the company as its predecessor accounted for 20-25 per cent of Ferrari sales, and was particularly good at attracting new clients to the brand.

The Portofino borrows styling cues from other cars in Ferrari’s current range, with the roof up it looks very much like a scaled-down 812 Superfast thanks to its flowing coupe-like folding hard-top roof, L-shaped lights and prominent rear bodywork around the exhausts.

> Read our review of the Ferrari California T

The new name, Portofino, gives us a hint that this new car won’t be a dramatic departure from the old California, a car designed to be more about usability than offering the most thrilling driving experience. Rather than choosing a name associated with wonderful driving roads or legendary race tracks, Ferrari decided on borrowing the name from glamorous town on the Italian Riviera. 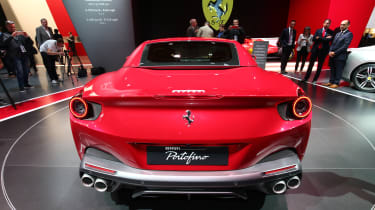 But there are promising signs that the Portofino will be a significant improvement over its predecessor. Firstly, the engine, although predominantly the same as in the California T, has been subjected to a thorough overhall. New pistons, conrods, intake system and exhaust manifolds have resulted in an increase of 39bhp, taking the total output to 592bhp at 7500rpm, but torque has only swelled by 3lb ft to 560, although that figure is available between 3000 and 5250rpm.

These revisions don’t translate to huge on paper improvements in performance over the California T although Ferrari does say the Portofino has an improved throttle response. Launching from a standing start you’ll see 62mph in 3.5sec and 124mph in 10.8sec – 0.1 and 0.4sec quicker respectively than its predecessor. Despite the lower drag coefficient (a six per cent improvement over the California T), flat-out the topless Ferrari runs out of puff a single mile per hour shy of 200.

The Portofino also utilises the same Variable Boost Management that helps the 488 GTB feel so responsive, natural and approachable, despite being turbocharged and having vast amounts of available torque. The system limits torque in lower gears to give the rear tyres a fighting chance of finding grip, even at full throttle. It can then use the engine’s maximum torque in higher gears to improve performance when traction is less of an issue. 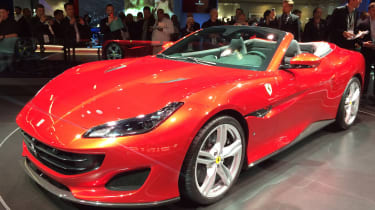 Another exciting development is that the Portofino will benefit from Ferrari’s E-Diff3, an electronic limited slip differential that can actively distribute torque to either of the rear wheels as it sees fit. Just as on the more expensive models in Ferrari’s range, the e-diff in the Portofino communicates with the stability control system, called F1-Trac and the magnetorheological dampers so there’s a consistency to the way the car reacts. The presence of E-Diff has also allowed Ferrari to shorten the lock-to-lock steering ratio by seven per cent.

At 1664kg the Portofino is about 70kg lighter than the California T, and its weight distribution split is 46-54 per cent front to rear. In part these weight savings are the result of improved component integration while 15kg of the weight saving on the Portofino comes from changes to the car's structure. Witness the A-pillar architecture which consisted of 21 separate components on the California T, yet for the Portofino it’s been pared down to just two. Ferrari says this fusion approach has also increased body stiffness by 35 per cent, too.

The Portofino, just like the California, has a set of small rear seats, but thanks to a newly designed magnesium structure for the front seats there’s 50mm of additional legroom for rear passengers. Further improvements over the California T include a new larger infotainment touchscreen, a new steering wheel and a wind deflector to reduce noise when the roof has been lowered.

Deliveries will start for left-hand drive European markets in the first quarter of 2018 with right-hand drive UK deliveries and North American cars expected in summer 2018.

And if you were worried about the possibility of Ferrari following everyone else and jumping on the SUV bandwagon the word from Frankfurt is that you can sleep easy from now on. Ferrari says it will only make a new model line if it’s something that’s not already being made, and whatever it makes has to be a ‘sports car’. So an SUV doesn’t qualify…