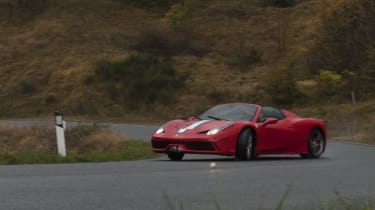 The final iteration of the normally aspirated V8-powered Ferrari (the turbocharged 458T is due at the Geneva motor show in March) and an open-topped version of the car that won evo Car of the Year 2014.

It’s no secret that we’re fully paid-up members of the Speciale fan club and the Aperta (for ‘open’), of which only 499 will be produced at £228,682, looks unlikely to change that.

The Speciale A retains the coupe’s 597bhp, 398lb ft V8 and everything else that makes the coupe such an immersive car: the seven-speed dual-clutch gearbox, the E-diff, the magnetorheological dampers, the latest CCM3 carbon-ceramic brakes and that incredible Side Slip angle Control (SSC) system.

The real key to the Speciale’s magic is that all this technology melds seamlessly with the driver’s inputs, augmenting talent but never detracting involvement.

Will another 50kg because of the folding roof mechanism, plus a slightly higher centre of gravity and the inevitable reduction in structural integrity create a disconnect between driver and the way the car deconstructs a road? Erm, I doubt it. But it pays to keep an open mind in this business so we head to ‘our road’, a home away from home about 80 miles from Maranello, intent on finding out. 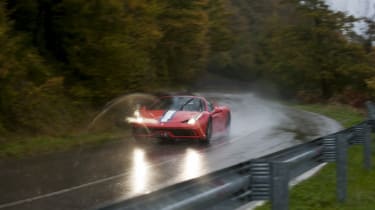 The Speciale A tracks straight and true through the deep standing water of our test. The Michelin Pilot Sport Cup 2 tyres inspire complete confidence, while the Aperta exhibits the same supremely supple but controlled ride as the coupe.

However, this Speciale A is maybe only 70 per cent as loud under load as the coupe and could almost be described as refined on part-throttle. Apparently Ferrari ‘turned down a bit' for the open car to stop it becoming ‘unbearable’. The note is also sweeter and more tuneful.

The Speciale A hasn’t lost any of its ability to entertain. The super-fast steering is weighty enough to lean up against, and the load through it shifts as the front tyres seek out grip on the sopping wet, leaf-strewn surface. You get such a precise picture of the chassis’ grip and balance that confidence builds quickly. In these conditions the Speciale A’s incredible beyond-the-limit poise is easily accessed for those who look for it, but the real magic is in how the electronic systems allow you to exploit so much of its potential with no fear and without heavy-handed intervention.

Traction in the manettino's Wet setting is spooky. Sport, in combination with the ‘bumpy road mode’ is probably the sweet spot today, allowing the car to be manipulated around its limits without ever slithering way beyond them. Once you connect with the car’s steering and reactions it’s tempting to click further to Race or CST Off – thereby bringing the Side Slip angle Control system to the party – but the downshifts are so aggressive that the rear axle feels like it might lock on the way into corners. Why tread that fine line when Sport mode creates such a wide, softly curved ledge on which to express yourself?

The rest of the dynamic flavour is pure Speciale, from the superbly firm but progressive brakes, the scintillating engine, and the way it responds to your inputs and to the road surface itself.

Its closest rival is the McLaren 650S Spider. McLaren’s offering is a little cheaper at £215,250, though that gap is as good as insignificant once you’ve personalised either car to your tastes. It goes almost without saying that the 458 is more theatrical – that’s not to slight the McLaren for its more clinical approach to speed, more to inform that some may prefer the 650S’s more restrained character, others the Ferrari’s in-your-face attitude.

Our only question mark next to the McLaren is that in the UK, the standard 458 Spider feels vastly more wobbly than the carbon-tubbed 650S. The Speciale A has no more bracing than the Spider so expect plenty of flex on poor surfaces and a little reduction in the precision so intrinsic to the coupe.

Other rivals at various price points include the Lamborghini Aventador LP700-4 Roadster and Aston Martin Vanquish Volante, but neither is quite as highly rated in our view.

For me the coupe will always be the one because I’d always choose pure dynamism over a bit of wind in the hair. But having said that, there’s no question that the 499 people eagerly awaiting their new toy will not be disappointed. The Speciale A is, rather predictably, jaw-dropping.