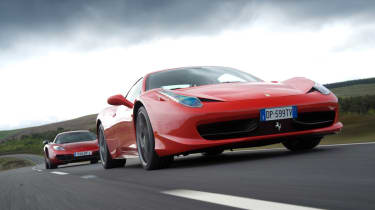 In the biggest clash of 2011, Ferrari 458 Italia beats McLaren MP4-12C. The 202mph, 562bhp 458 is resoundingly more emotive than the 205mph, 592bhp McLaren.  Contrary to predictions, the Ferrari lapped Bedford over a second faster than Woking’s baby with our own Roger Green at the wheel. With the hype surrounding the McLaren’s outright speed and efficiency we thought it would trump the Ferrari not only on pace, but also detailing and user-friendliness. At eight-tenths on the road, the Mac does not feel as thoroughly resolved as we expected it to be.  The MP4-12C is quicker in a straight line, rides better, is more economical and more stable. However, the brakes’ initial bite is hard to modulate, the gearbox’s paddle action is not to our taste and overall, the McLaren MP4-12C lacks the emotional pull of the Ferrari 458 Italia.