As presents to yourself go, this one to celebrate Giorgetto Giugiaro's 50th year in the car design business is a belter. Called the Ferrari GG50 and based on the 612 Scaglietti, the rebodied coupe was hand-sketched by Giugiaro himself. 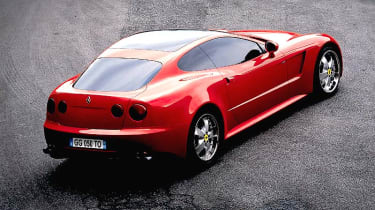 As well as being roughly four inches shorter - mostly in the tail - than the donor car and having a remodelled nose, what also makes the GG50 unusual is that it's a hatchback with fold-flat rear seat-backs. In sanctioning Giugiaro's reworking of the 612, one of Ferrari's stipulations was that it must remain true to the spirit of the marque; Maranello also lent technical support. Interestingly, despite being one of the world's car design deities, Giugiaro has never officially styled a Ferrari - traditionally this work has been entrusted to rival Pininfarina.