Ferrari's pretty adept at disguising its models during testing, and not just with black masking: it's quite conceivable that this test model of the 575 Maranello replacement, codenamed F139, is actually running under lightly modified 612 Scaglietti mule bodywork. 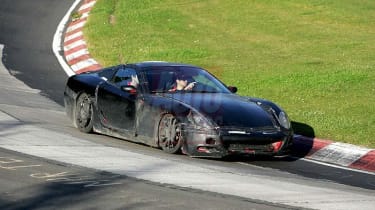 The F139, dubbed 600 Imola or 600 Maranello, will share its platform with the 612 Scaglietti, albeit shortened. Nevertheless, it should have a longer wheelbase than the 575 and therefore a roomier two-seat cabin, while more luggage space is also likely. Because the F139 will use the same aluminium spaceframe technology as the 612 Scaglietti, even though it'll be bigger than the 575, it might weigh about the same as the 575's 1730kg kerb weight - the bigger, four-seat 612 only weighs 100kg more thanks to all that aluminium. As well as bigger, the 600 Imola should be faster than the 575 it replaces, too. Its V12 engine, based on the Scaglietti's (itself a development of the 575's), has been increased to a 6.0-litre capacity, and is likely to deliver more than the 612's 540bhp. Some sources suggest that the 600 Imola will boast 580-600bhp, close to 100bhp/litre, but we'd estimate something rather more conservative, perhaps 560-580bhp, with peak power arriving on the high side of 7,000rpm. A replacement for the 575 Maranello is certainly due. The 575 is a revised 550, which has been on the market since 1996, so it'll have notched up a ten-year production run by the time the 600 Imola arrives. With bodywork by Pininfarina, the new car is likely to debut at the Geneva Motor Show in 2006. 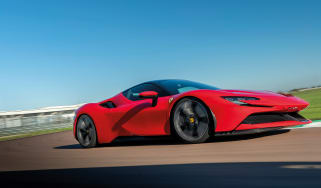