The 124 Spider is a name that dates back to the sixties and the original Fiat 124 Sport Spider. Sold alongside the mid-engined X1/9, the 124 Sport Spider was on sale under various names from 1966 to as late as 1985. The original Spider shares a lot with the contemporary model – they’re both four-cylinder, front-engined, rear-wheel drive, two-seater roadsters that place an emphasis on fun, rather than practicality or outright performance. Both cars even began life with 1.4-litre engines – but that’s where the similarities end.

The modern Fiat 124 Spider doesn’t actually contain all that many Fiat components. Yes, the bodywork drips with Italian style, but under the skin you’ll find the same structure, suspension architecture and even interior as the very Japanese Mazda MX-5.

> Read our review of the Mazda MX-5

Where Fiat’s done the most work is in the engine bay. While Mazda fits 1.5-litre and 2.0-litre naturally aspirated units, Fiat has swapped these out for a 1.4-litre turbocharged engine.

Performance and 0-60 time – The 124 Spider feels sprightly enough, with 138bhp on tap – but the faster Abarth model will appeal to more enthusiastic drivers

MPG and running costs – Decent emissions and fuel economy, but a similarly powered hot hatchback will be cheaper to run

Interior and tech – Interior is shared with the MX-5, but materials are plusher. Manually operated roof is simplicity itself 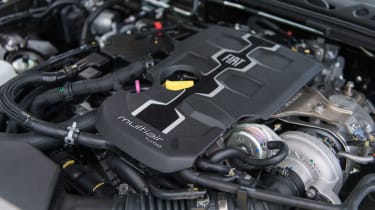 The 124 Spider’s price starts from £21,050 for a Classica model and rises through Lusso to just over £25,000 for the Lusso Plus. As all models share the same engine, it’s a question of equipment. All cars get Bluetooth, USB and aux-in, keyless go, cruise control, air-con, and a leather multifunction steering wheel. Lusso adds a 7-inch touchscreen sat-nav and infotainment system, upgrades the air-con to full climate control and heats the front seats. Lusso Plus adds a Bose sound system, and it’s also the only trim level with the option of an automatic gearbox – a six-speed unit that’s nowhere near as involving as the standard manual.

The most compelling rival for the Fiat 124 Spider is the Mazda MX-5 with which it shares much of its underlying structure. The MX-5 is arguably better-looking (though that’s of course subjective), and offers up naturally aspirated engines which tend to be best-loved by enthusiasts. The difference is in the character. The Mazda is best when revved – keeping the engine in its high-up powerband to maintain momentum. The Fiat on the other hand is a more relaxed choice, with more mid-range shove. There’s very little to separate the two elsewhere, but the Mazda is cheaper in entry-level form than the Fiat – starting from £19,465 compared to the 124 Spider’s £21,050.

A different yet equally fun offering is the Mini Convertible. Offered in an array of performance levels, from Cooper to firebreathing JCW form, it’s priced from £19,265 – which nets you a 134bhp 1.5-litre three-cylinder engine. The Mini is front-wheel drive, though, rather than the Fiat’s rear-drive layout – a point which may be a dealbreaker for some.

If all you want is drop-top motoring at a reasonable price, there are supermini ‘convertibles’ like the DS 3 Cabrio and the Fiat 500C, but these don’t provide the same wind-in-the-hair thrills as a full convertible.