Fiat has let its exterior designers go to town on the 124 Spider, completely quashing any trace of Mazda’s own handiwork – in contrast to the interior. The result is reasonably successful though, thanks to retro touches recalling the original Fiat 124 Sport Spider.

The Spider’s nose features a split grille with a flattened hexagonal motif, with the LED headlights faired into the bodywork just like the original. A prominent character line runs down the side, towards the back of the car where the boot kicks upwards into a prominent spoiler. Crowning it all are twin bulges in the bonnet, which on the original car hid dual overhead cams, but are now just a pleasantly reminiscent styling touch. 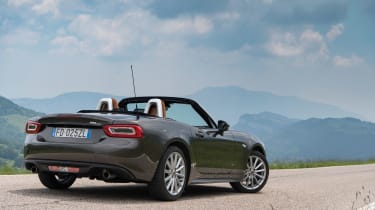 Opting for the heated-up Abarth model adds an even more retro look, with a classic matte black bonnet – just like the Abarth rally cars of the 1970s – plus a more aggressive treatment for the front and rear bumpers.

If there’s any criticism to be given, it’s that the proportions of the 124 Spider seem a little bit off. It almost seems that Fiat’s stretched its own bodywork over the top of the MX-5's, without removing the Mazda body first. It’s bigger than the Mazda, but the identical wheelbase means it doesn’t sit quite as well on the road as the Japanese car.