At low revs the engine can feel sluggish, and there’s no reward for wringing it out as there is in the MX-5. It’s obvious that this is a turbocharged car – there’s notable turbo lag, and power swells at different points in the rev range.

Get it above 2500rpm and into the boost zone, and the engine happily buzzes away keeping the Spider going at a decent pace. The turbo whistles and chirps and makes the 124 sounds like it's auditioning for a part in a Fast and Furious film. That might sounds hugely out of place, but it adds a degree of charm that most modern turbocharged four-cylinders are severely lacking. 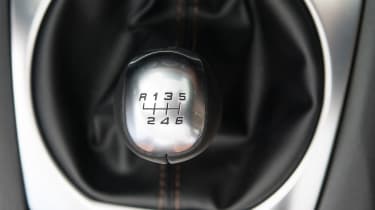 Throttle response is also good, and the engine is free-revving enough to help make the most of the tightly-packed pedals when heel-and-toeing down the gears.

The transmission is the same great ‘box found in the MX-5, only it’s been beefed up slightly to cope with the extra torque the Fiat has to offer. It’s still one of the absolute best in the business, with its short throw and precise shift, but it doesn’t quite suit the 124 Spider’s laid-back character like it does the more energetic MX-5.