The Fiat’s cabin shares its design with the Mazda MX-5 – the two are almost identical, and were it not for the badges on the steering wheel you might struggle to tell the difference. That means there is room for two people, though they’ll have to be fairly friendly and tall drivers might struggle to get comfortable behind the wheel.

There’s not a lot of space for clutter either, as the 124 Spider shares the MX-5’s total lack of cabin storage. There’s no glovebox and only the bare minimum of storage cubbies in the dashboard. Even the cupholders are absent at first, replaced by flimsy clip-in units which can slot into a few different places around the cabin. Don’t expect to carry big bottles, though they’re perfectly suited to a cheeky Italian espresso. The only meaningful cabin storage is a lockable bin between the seats.

The dashboard layout is identical to the MX-5, so it’s very effective – big, clear instruments sit behind the steering wheel and in the centre of the dash is a large, 7.0-inch infotainment screen on all but entry-level models. This can be operated by touch or via a dial in between the seats. 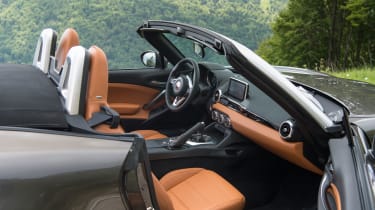 Fiat uses Mazda’s own infotainment software, which is easier to use and more intuitive than the Uconnect system on other Fiat models.

The 124 Spider also shares the MX-5’s roof mechanism. That’s another plus, as it’s simplicity itself. With just one catch and manual operation, raising or lowering the roof can be accomplished with one hand without even moving from the driver’s seat.

The Fiat scores in two areas over the MX-5. First is the boot, which has a useful 140-litres of storage – ten more than the Mazda. The second is the cabin materials, which are more upmarket than in the MX-5.