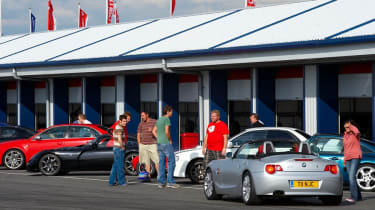 The third evo Track Evening of the 2009 season took place on Friday July 10. It was another hugely popular event, with a real eclectic mix of cars lapping the South West circuit of evo’s home track. The weather behaved itself, too, with plenty of sun but no unbearable humidity.

Among the highlights were a KTM X-Bow, Porsche 996 GT2, Megane R26.R (driven by an OAP!) and an array of Westfields and VX220s. As usual there was an abundance of Renaultsports and a Panda 100HP.

Some mad old stuff appeared as well, in the shape of an E30 BMW and a strikingly quick Fiat Coupe that tore chunks out of just about everyone on the main straight. We were present, too, with appearances from Henry's Megane, Adam's Civic Type-R and Paul's Mini JCW as well as a debut for Ev's BMW Z4.