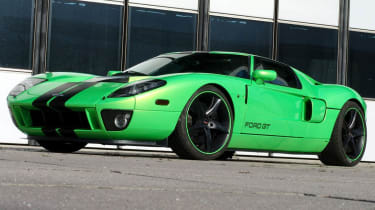 The mad German tuning continues. The Essen motor show starts on November 28, and it’s clear that plenty of the tweaking companies are producing some sterling efforts.

Like this, in fact - the Geiger HP 790. It’s a Ford GT supercar tuned up to 779bhp (or, as the name suggests, 790hp). That’s a rather large 229bhp rise, while torque is up by 27 per cent to 637lb ft. The changes come courtesy of changes to the standard GT’s supercharged 5.4-litre V8 engine: a larger compressor (up from 2.3 to 4 litres), a new air filter and throttle valves, improved cooling and revised electronics. Performance improves markedly as a result, with a 3.6-sec sprint to 62mph (with 124mph hit in 9.6sec and 186mph in 22.8) and a 224mph top speed, up from the Ford’s 205mph maximum. It makes the Geiger quicker than a Lamborghini SV, Pagani Zonda or Ferrari Enzo. Unsurprisingly, there are suspension tweaks to accompany the extra power and speed. There’s a bespoke coilover setup with hydraulic shocks with adjustable pressure and rebound damping. The car also rides 60mm lower than a stock Ford GT.  Of most interest to bystanders and exitable schoolboys will be the HP 790’s exterior, though. It’s safe to say it’s quite green, but with the addition of black stripes and matt black alloys it’s more reminiscent of a poisonous invertabrate than Kermit. Those alloys are equipped with Dunlop Sport Maxx tyres, 245/35R20 up front and 325/30R21 rear to try and put all that power on the road.Click here to read about the Corvette BlackforceOne at Essen Follow evo on Twitter for the latest fast car and supercar news