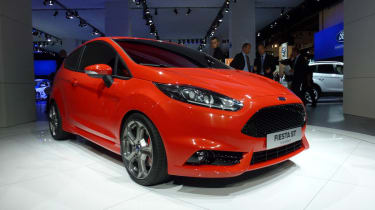 Ford has gone on a hot hatchback frenzy at the 2011 Frankfurt motor show.

Taking top billing has been the first sighting of the long awaited Fiesta ST. Boasting a 178bhp turbocharged engine, it looks set to take the fight convincingly to the Renaultsport Clio 200 and Mini John Cooper Works. Full details and picture gallery here.

The Focus ST has already been seen in concept form, but it’s here at Frankfurt in full, 246bhp production trim. And the surprising (but excellent) news is there’s an estate version, too. The full story on the new Focus ST is here.

The Focus ST-R is a racing version of the new Golf GTI rival, and has been developed by Ford Racing in America. It uses the same 2-litre turbo Ecoboost engine as its road-going sibling, but packs in an FIA roll cage, uprated brakes and suitably track-tuned suspension.

Finally, the Ford EVOS is a striking concept car that previews a new design language for the Blue Oval that we can expect to see hints of in the next Mondeo. Though we’re doubtful of those cool doors making production… See the full EVOS story here.