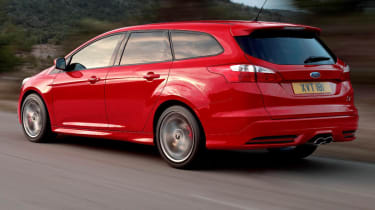 The long wait for a performance version of the current Ford Focus is nearly at an end, with Ford opening the 2011 Frankfurt motor show by taking the wraps off the new Focus ST production car.

Both a five-door hatchback and - more surprisingly - a five-door estate have been shown. Power comes from a 2.0-litre four-cylinder Ecoboost turbocharged petrol engine in place of the previous ST's 2.5-litre turbocharged five. Despite the loss of capacity, the new motor makes a claimed 246bhp - 24bhp more than the old car - accompanied by a fat 266lb ft of torque.

The smaller engine is also far greener than the old T5, with Ford saying that fuel economy and CO2 emissions have both been improved by more than 20 percent. No figures have been released yet, but if Ford delivers on that claim it means the new car should be capable of returning mid-30s mpg, on the official cycle at least. To that end the car features a 'five-plus-one' gearbox, with closely stacked ratios lower down for performance and a tall sixth gear for economy.

Unlike the previous Focus ST, the new car is being pitched as a 'world model', with the five-door hatchback set to be sold in America and some parts of Asia as well as Europe. And although we'll have to wait and see what it drives like, the press pack released at the show does make great play of the car's 'level of refinement rarely seen in this sector of vehicle.'

The estate version has been developed exclusively for Europe and there is some precedent in the fact there was a wagon version of the original mk1 Focus ST170.

All versions of the new ST will have a 'sport steering' system with a variable ratio steering rack and a 'torque steer compensation' system that uses the stability control system to counter-act the sensation through the steering wheel. The ESP system includes a partially deactivated 'wide slip' mode, with the further option - denied to base Focus drivers - to entirely deactivate stability control.

Sports suspension means the ST sits 10mm lower than the standard Focus, it also gets uprated steering knuckes and different anti-roll bars. The ST estate will have angled rear shock absorbers to maintain the size of the boot. The unique design of alloy wheels will be fitted with 235/40 R18 Goodyear Eagle F1 tyres.

Exterior design benefits from a relatively subtle bodykit - leaving the way clear for the inevitable full-on 'RS' version - while the interior gets various bits of sporty bling and Recaro branded sports seats.

As before, the ST will be offered in Europe in three specification levels, ST1, ST2 and ST3. The ST1 has cloth seats, the ST2 gets part leather and dual-zone climate control plus automatic wipers. The full-on ST3 has leather Recaros with eight-way adjustment plus bi-xenon headlamps.

Prices and final specs will be confirmed closer to the ST's on-sale date later this year.