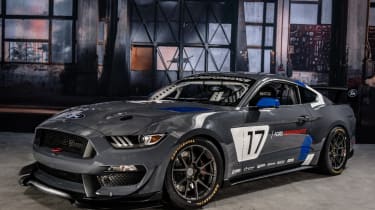 The annual SEMA show in Las Vegas is well underway, and official manufacturer support is greater than ever - not least from Ford.

A huge range of customised Fords have debuted at this year's show, most of which are based on Ford's Mustang and Focus ST and RS performance cars - with a significant number based on the firm's best-selling F-series pickup range.

Joining an official Ford Performance GT4 Mustang race car - with a dry sump, spool valve dampers and an aero package - are cars from MRT, Speedkore Performance, Stitchcraft, VMP Performance and more, each offering a different take on both the V8 and 2.3-litre EcoBoost versions of the latest-generation pony car.

VMP's car, for instance (recognisable from its US Navy-style colour scheme) supercharges the 5-litre V8 to 851bhp and 703lb ft of torque, uses Roush suspension, and sits on Michelin Cup 2 tyres.

Stitchcraft's car is completely different, based on the Mustang Convertible and using a 2.3-litre EcoBoost four-pot and automatic transmission. Changes here are aimed more at style than speed, with airbag suspension, orange paintwork and a retrimmed cabin. 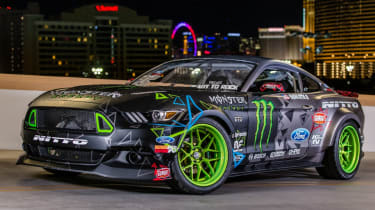 More striking still, but for different reasons, is Speedkore's carbonfibre-clad black car. Like the VMP car it's supercharged, and power output is similar: 825bhp. It sits on Eibach coilover suspension and again wears Cup 2s around its 20-inch wheels.

The Mustangs are joined by a huge range of customised F-series pickups, as well as a handful of Fiesta and Focus models - among which is a white, wide-arched Fiesta ST developing twice the standard power output. Ford's Fusion (the US market version of the Mondeo) also features, as do a pair of Transit vans.

You can find out more from the SEMA show by heading to our show hub page.