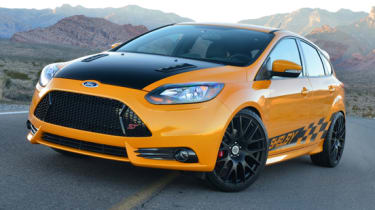 Full 2013 Detroit motor show coverage here The tuned Focus gets lower, Ford Racing suspension, new wheels and stickier tyres as well as larger, drilled brakes discs and a Shelby/Borla exhaust to boost the ST’s burbling soundtrack. On the outside, there are functioning bonnet vents, tweaked front and rear grilles and a beefier rear spoiler. A host of graphics packs range from traditional Shelby stripes to the chequered flag pattern you see here. There is no power increase for now, but Shelby promises a significant horsepower increase in the near future. Expect at least 300bhp, up from the standard ST’s 247bhp. The 2013 Shelby Focus ST package costs 14,995 US dollars – additional to the car itself, which starts at 23,700 USD new. So the total package can be bought for the equivalent of £24,000 – a mid-spec Focus ST in the UK.