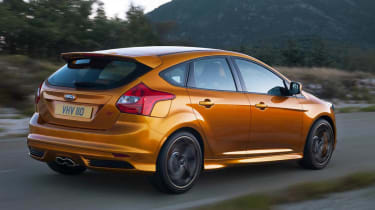 Ford has used the 2010 Paris motor show to launch the next generation of the Focus ST.  According to Ford the new version of its highly regarded ST is targeted for launch in all global markets by 2012 and will be the first high-performance model that Ford has developed under its global Performance Vehicles strategy meaning that the ST will find its way to American dealers for the first time as the US trend for downsizing continues.  This will come as welcome news to the army of fast Ford followers initiated behind the wheel of some of the world’s best affordable performance cars as emission regulations had threatened the future existence of the hot Focus.

It’s been saved by the introduction of an all-new turbocharged 2.0-litre, four-cylinder EcoBoost engine boasting 247bhp, 266lb ft and the promise of serious performance matched by the requisite improvements in economy. There has been no word yet on specific figures but a 0-60mph time around 6.0sec and a 150mph+ top speed can be expected in order to compete with the current Renaultsport Megane 250 and forthcoming Vauxhall Astra VXR.  Helping to put this performance into practice will be a modified version of the RevoKnuckle front suspension system first seen on the current generation Ford Focus RS.  The styling, especially in the tangerine launch colour of the Paris show car, is largely an evolution of the current model and will continue to split opinion (especially with that gaping ‘mouth’) but the new Focus ST will no doubt feed the passion of fast Ford buyers. The interior of the ST will feature all the trappings of the top-end Titanium model but owners will also be treated to a bespoke steering wheel and Recaros for both front and rear passengers.  Due to be on sale by late 2011, the ST is expected to be priced slightly higher than the current model, at close to £24,000.