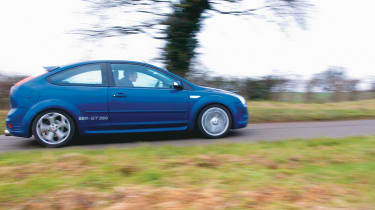 The standard Focus ST arrived on our shores just over a year ago, and it wasn’t long before the aftermarket chaps started rubbing their hands together and booting up their laptops. First there was Superchips’ 255bhp Bluefin conversion (good value, does the numbers, but a little subtle), next came Graham Goode Racing’s small turbo, 303bhp job (looks good under the bonnet, good value, bloody quick), then Wolf Concept’s big turbo, 296bhp kit (bit more expensive and the car we tested had a problem). Now there’s this, the BBR ST280 from Morego.

This latest addition to the world of mutant Foci comes in at £1295 including fitting, which gets you a catalyst-back stainless steel exhaust system, a BBR carbon-look air inlet and a StarChip ECU remap.

The most interesting of these components is the air inlet. Morego discovered a significant airflow restriction in the standard airbox caused by the ECU’s location, so it manufactured an extension that repositions the ECU to allow freer breathing whilst still ensuring that the ECU is kept cool. This alone gives a claimed gain of 12bhp and is available separately with a free-flow air filter for £250. Even better, you can have your engine bay returned to standard relatively quickly, should you so desire, and if you’re worried about your warranty becoming as useful as a poke in the eye then you can buy one from Morego for £150 a year.

This car has the full 55bhp upgrade, though, and you don’t need to look under the bonnet to know it – just have a wander around to the back where you’ll find two huge 4in tailpipes emerging from the rear bumper. Get in, turn the key, and a richer, more bass-heavy soundtrack reaches your ears. It sounds even better from outside and you can imagine small boys running to windows to see what’s going down the street only to be slightly perplexed when they discover the noise is coming from a Focus.

Set off and the first good sign is that the ST280 remains as tractable and easy to use at low speeds as the standard car. The 300lb ft of torque (up 65lb ft over the standard car) makes itself felt early on in proceedings, giving the ST noticeably more punch in any gear and at any point in the rev range. The conversion is almost worth it for this alone.

Things really start to pick up above 5000rpm, however. Damp roads see the ST trying to melt its traction control electronics if you venture into the upper reaches of the rev range and don’t have your thinnest, most sensitive socks on. But turn the nanny off, feed the power in progressively, and the ST280 can cover ground at serious speed. It feels every bit as quick as the two 300bhp conversions we tried last year and more polished to boot.

Now, you might have noticed that this car is also slightly lower to the ground than a normal ST. That’s because for £695 you can have a high performance spring set and BBR’s PowerGrip suspension fitted as well. The springs lower the car, while also reducing the ST’s slightly roll- and pitch-heavy balance, while the PowerGrip set-up replaces the front wishbones, widens the front track and adds negative camber to improve grip and turn-in.

The changes feel good, with no unseemly crashes and much less roll in the corners. Unfortunately, somewhere in the process of swapping everything over, the steering feel has gone AWOL. This means that you have no real faith in what the front end is doing, particularly on turn-in, where you can’t tell just how much you’re really asking of the Continentals’ tread blocks.

So we’d leave the suspension changes for now, but in a very competitive market the BBR ST280 is certainly the best engine conversion for the Focus ST that we’ve tried so far.