With 25bhp more power than its predecessor, the Focus ST sprints to 62mph in 6.5sec, matching the Volkswagen Golf GTI. 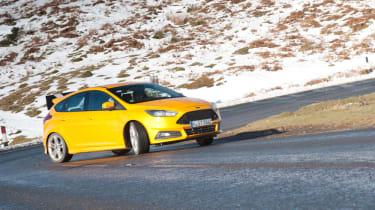 The engine isn’t a natural revver, and although it’s willing enough to explore the upper reaches of the tachometer, it’s the storming mid-range that’s most effective, and progress is accompanied by a pleasingly rorty exhaust note. Ford was acutely aware that a large part of the old five-cylinder ST’s appeal was its deep-chested, warbling soundtrack, a noise the new four-cylinder motor wouldn’t naturally replicate.

So the new ST has a ‘sound symposer’ that pumps induction noise through a resonating tube to the back of the facia, a trick that gives the impression of a bigger engine with more cylinders, ensuring the character of the old 2.5 isn’t completely lost. Clever. 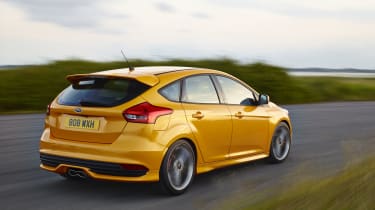 So, the Ford Focus ST performs well, with class-competitive acceleration against the clock and a healthy dose of real world overtaking urge delivered with a decent quasi-warbling soundtrack to boot. But if that’s not quite enough, official Ford tuner Mountune will fit a cast alloy inlet duct, high-flow air filter, larger alloy intercooler and an ECU recalibration, which lifts power and torque to 271bhp and 295lb ft, respectively. These tweaks chop nearly a second from the 0-62mph time. The package costs £1225, takes 90 minutes to be fit and, thanks to Mountune’s official tuner status, doesn’t affect the standard ST’s warranty.

Those seeking a different kind of performance can now opt for a diesel model, too. The ST TDCi lunges to 62mph in 8.1 seconds (8.3 for the estate) and hits 135mph flat out - not quite on-par with the petrol but reasonably competitive with rivals like the Volkswagen Golf GTD.

Keep the engine in its sweet spot and the ‘box in the right gear and the performance trade off of having a diesel fuelled engine is low when you’re pushing along at under ten-tenths.