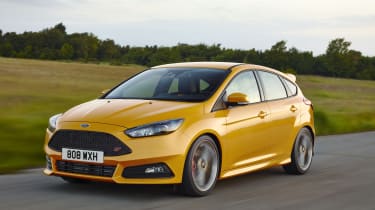 You’ll have to drive extremely gently to get near the claimed official 39mpg combined figure, which equates to 169g/km of CO2. Under what we have to admit was fairly extreme testing we managed a rather alarming 15mpg according to the trip computer.

In regular mixed (though still enthusiastic) driving, we've been achieving around 30mpg in our long-term ST estate. That's a whole lot better than you could expect from the old five-cylinder car. More frugal as it is, the ST still can't quite match the Golf GTI, which records official figures of 47.1mpg and 139g/km of CO2.

If fuel costs are a big concern, then the diesel ST presents a much rosier picture, achieving 64.2mpg on the combined cycle, which meas a modest 114g/km of CO2. Don't expect to achieve those numbers in real-world driving, but over most journeys the diesel should sip significantly lower quantities of fuel than the petrol. We achieved 47mpg on a long continental road trip in our long-term ST TDCi estate, and comfortably over 40mpg in normal running.

Depreciation is where Ford habitually falls down, and, fine value as it undoubtedly is on the showroom floor, the Focus ST is a consierably better buy used. Residual values simply aren’t in the same league as a Golf GTI’s and the ST will struggle to hold onto 40 per cent of its value after three years.