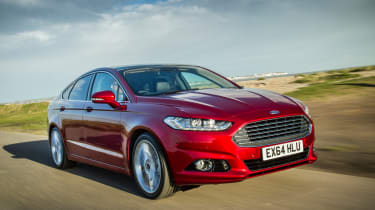 The result is a car that – I can’t believe I’m writing this about a Mondeo – flaunts sporty lines on the outside, and possesses a cabin that seems worlds away from the overly busy interiors of Ford’s recent past. If we’re being vain, the new Mondeo seriously impresses. 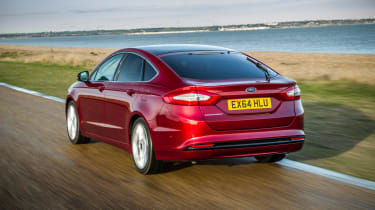 Tech highlights include Ford’s SYNC 2 system, recently unveiled on the Focus and now part of the Mondeo range. The system enables satnav and a range of ancillary controls to be accessed through menus, and perhaps most pleasingly, its voice recognition actually works. Want to eat? Simply say ‘I’m hungry’ and SYNC 2 will find local restaurants for you. 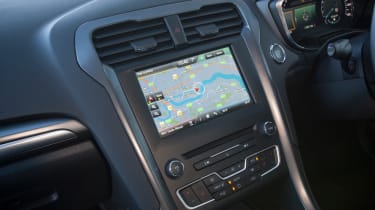 Another tech feature that grabs attention is the inclusion of rear inflatable seat belts. The seatbelt airbags help to protect ribs and shoulders during hard shunts, areas commonly injured by conventional belts. Their fitment has helped the Mondeo achieve a five star Euro NCAP rating.

The new car also receives dynamic LED lighting as an option for the first time, with improved brightness and dynamic indicators improving practicality and ultimately, adding to the new Mondeo’s looks. 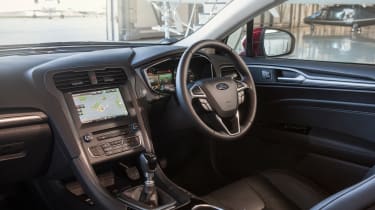 On Launch it comes available with two petrols, two diesels and a new hybrid powertrain. More units, including Ford’s award winning 1-litre three-pot, will soon follow, to complete a range of the most efficient Mondeo engines ever.

Both petrol and diesel engines come available with Ford’s six-speed manual as standard, with a six-speed PowerShift auto an option. The hybrid uses a more efficient CVT system.

Efficiency of the new car is boosted with the fitment of an active front-grille and smoothed underside, both helping to better aerodynamics by 10 per cent compared with its predecessor.

The 1.5-litre EcoBoost engine produces 158bhp and feels well matched to the slick six-speed manual it comes mated to. Essentially, it’s a clean-revving four-potter with enough torque low down (peaking at 177lb ft) to allow quick progress, but happily, performance is still fruitful up top.

Torque dies off before 5000rpm however, so if it’s effortless progress you want, you’ll spend your time surfing the mid-range of the rev-counter. That peak power is produced at 6000rpm though, so if you want to test the claimed 9.2sec 0-62mph time, there’s a satisfying requirement to rotate the needle up the rev-counter.

We also drove the 1.6 TDCi, an important unit given diesels are expected to represent a substantial 92 per cent of the Mondeo’s predicted 20,000 annual sales. 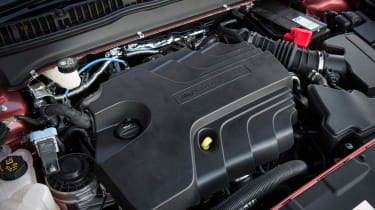 With CO2 emissions of just 94g/km combined with 115bhp, it’s cheap to run (and tax exempt) and nippy enough with Ford’s long legged manual ‘box. A 2-litre TDCi unit takes things a step further by offering as much as 180bhp, whilst emitting just a puff more greenhouse gas.

Both diesels still manage to offer a wide window of torque to enjoy the Mondeo’s updated chassis, but as is often the case, the petrol offers the most if you really want to unlock its full potential.

Don’t be fooled by the Mondeo’s tag as a rep-mobile, because seconds into an enthusiastic drive it becomes clear the engineers responsible for fine-tuning the suspension are fans of driving. Some of the DNA we experienced in our recent Focus drive – a poised, agile chassis, accurate steering – can all be felt in the larger Mondeo. 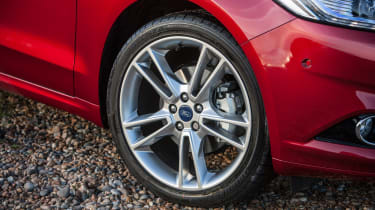 Whilst the ride is undeniably softer than the outgoing car, grip and the sense of agility have certainly increased. It results in a car that does well to carry speed through winding lanes, the chassis ironing out surface changes, enabling smooth and quick progress.

Don’t get us wrong, wring its neck and the Mondeo struggles. But as a car in which to make swift progress at seven-tenths, it’s much improved and will worry the likes of more expensive rivals.

And what of its motorway cruising ability? With cruise control set to 70, we saw over 48mpg without breaking a sweat from the 1.5. The car was quiet and impressively refined, even on the roughest of concrete surfaces.

The Mondeo hatchback 1.5-litre EcoBoost in Titanium spec starts at £22,245, which just undercuts the similarly specced 1.6-litre Vauxhall Insignia Elite, it starting at £23,084. The ever popular VW Passat out prices the Ford in similar SE spec, itself hovering above £23,000. 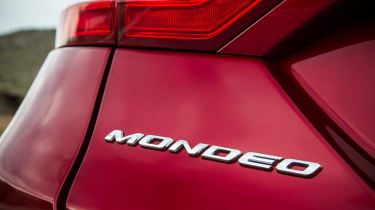 The Mondeo therefore offers a lot for the money, and while it can’t quite match the dynamics and badge snobbery offered with a BMW 3-series, it significantly undercuts the German alternative and its £24,245 starting price (which comes with significantly less kit than the well specced Titanium Mondeo).

All-wheel drive will be available later in 2015, expanding the Mondeo’s usability into the realms of a towing car (especially in estate form) and offering those in less accessible areas practicality in all-seasons.