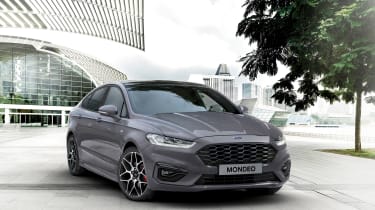 Ford has given the Mondeo a subtle set of updates in a bid to keep up with its much newer Skoda Superb  and Vauxhall Insignia rivals. Once a staple of the British motoring scene, the Mondeo hasn’t received a great deal of attention since its debut in 2013 due to a combination of shrinking sales in the sector and the market’s relentless consumption of SUVs and premium brands.

Regardless of the market challenges, Ford has given the model a much-needed nip and tuck, including a new engine variant, updated styling and a revised interior. Engines have remained largely the same, made up of two diesel variants (148bhp and 176bhp), a 163bhp 1.5-litre turbocharged three-cylinder petrol and 2-litre hybrid. The higher powered 176bhp diesel is the new engine option, which is connected to Ford’s new eight-speed automatic transmission, as well as optional all-wheel drive.

> Click here for our review of the Skoda Superb

Styling upgrades are subtle to say the least, with lightly revised bumpers and tail lights. The Estate’s rear styling was updated last model year, thanks to some quirks within the Mondeo’s model cycle, but the hatch now picks up the same horizontal elements and LED lighting. Otherwise, the Aston Martin-aping grille of the current car has been replaced with a new design more aligned to the latest Focus and Fiesta. The ST-Line is also more distinctive than before, featuring a more open grille treatment and lower bumpers that ape the design of other ST-Line Fords in the range.

The interior architecture is largely unchanged, but there is a new rotary controller for the automatic transmission opening up extra storage in the centre console and the latest version of Ford’s Sync infotainment system. Prices start at just under £22k for the entry-level Zetec model, rising to just under £33k for a fully loaded Vignale Hybrid estate.

Ford’s decision to drop a majority of its passenger car line up is being felt too, as the US-market Fusion, which was paired in development for this generation Mondeo, will not be replaced. As a result, we expect the Mondeo to have much the same fate, as family buyers are lured in by the (empty) promise of a more adventurous lifestyle in an SUV and the downwards march of premium players like Audi and BMW through aggressive pricing. What might be the final nail in the coffin is the one-two punch of traditional rivals like the vast, well-built and terminally sensible Skoda Superb and exceptionally stylish new Peugeot 508 that are proving the biggest enemy from within its own shrinking sector. Time will tell if the Mondeo’s updates are too little, too late.