Ford Mustang EcoBoost review - is the V8 worth the extra cash?

Does a smaller engine mean smaller thrills in the Mustang? 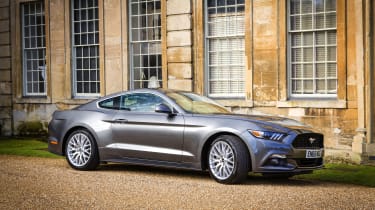 A proper Mustang should be left hand drive, more American than a super sized Big Mac and above all else, not pander to fussy European motoring tastes.

But the new Mustang was designed from the outset to to be sold in Europe. In fact, Ford took the matter so seriously that not only did they make it right hand drive, the even opted for that age old continental favourite - fully independent suspension.

But and here’s the controversial bit, the car can now be specced with a turbocharged four cylinder engine. It’s the same 2.3 inline 4 that’s in the new Focus RS, just with 32bhp less power. Of course those after the full fat 5-litre V8 can stump up the extra cash, but the EcoBoost Mustang is designed to be more a halfway house between economy and performance.

In the Mustang, the all too familiar sound of an idling turbo’d four cylinder doesn’t quite match the acreage of bonnet that stretches out in front of you. Once the revs rise though, it’s clear the noise has been engineered to sound a bit like a V8.

The fact it’s even recognisable means it’s relatively successful. The throttle pedal’s travel is long, about an inch longer than seems natural. Initially this makes the engine seem unresponsive. 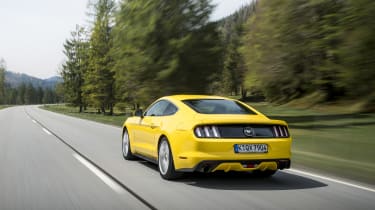 Below 4000rpm the Mustang feels heavy, as the engine doesn’t have much shove. However, once you’ve adjusted to the accelerator, and you use it with a bit more abandon, the engine wakes up. The top third of the rev range is worth holding out for as the EcoBoost unit likes to rev and continues to pull throughout.

The ratios in the 6 speed manual are close enough to keep the engine in its sweet spot. The gear linkage feels direct and there’s very little slack. That said, it’s not particularly smooth and there’s not a very natural spring effect either. You need to be positive with your changes, otherwise you’ll start to miss gears.

For the most part the EcoBoost actually feels very similar to the 5-litre V8. There’s a perceptible difference in front-end response between the two engine options, with the EcoBoost being sharper and more willing to change direction than the V8.

In a succession of short corners it feels more nimble and there isn’t as much body roll. However the V8, with its abundance of power and torque, means it is far more adjustable on the throttle, redressing any advantage the Ecoboost might have acquired.

Despite its more immediate turn-in, the Ecoboost Mustang still doesn’t like to be rushed. Try to hustle it down a road and it can feel awkward. Drivers will find themselves coming out of sync with the car and making new inputs while the chassis is still dealing with the old ones. 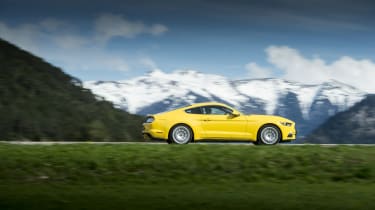 Braking deep and late into a corner only creates an unsatisfying and scruffy drive. Slow your inputs, giving the chassis time to settle and the Mustang comes together.

Brake early, turn-in and then use the throttle to adjust your line. When the rear is loaded, and the nose raised, the Mustang feels content. In tighter corners, the Ecoboost has enough performance to unstick the rear tyres. But again, the V8 can take better advantage of the Mustang’s long wheelbase making any resulting slides controllable and serene, whereas the Ecoboost’s are a little short lived.

A more relaxed driving style also makes it less necessary to heel-and-toe. That is a good thing, as it is practically impossible to do so in the Mustang. The huge gap between the accelerator and brake pedal makes it tremendously awkward.

Also, the character of both the brake and accelerator pedals appear oddly at loggerheads with each other. The brakes are over-servoed, making smooth inputs a challenge, and because the pedal is so short, it’s hard to move your foot over to the long throttle to rev-match. 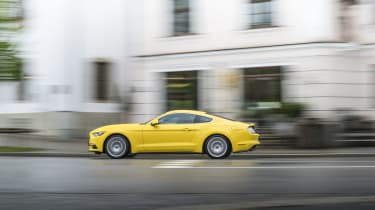 While the 2.3-litre Ecoboost is a good engine and compliments the Mustang well, the V8 is just that little bit more suited to the Mustang driving experience, adding that extra layer of character that might make the financial outlay worth it.

The EcoBoost Mustang sits in a rather unusual place, as really given its price point, it sits within its own market altogether. Those looking for a Ford Focus RS likely won’t be tempted by the Mustang, which is a different ownership experience altogether.