A taste as to how far Ford can take its current Mustang is easy to savour with the company’s own 526bhp GT350 – a car our very own Henry Catchpole feasted on back in issue 221. Head off-menu stateside and the likes of Shelby will serve current Mustang owners with a full platter of tuning options to salivate over.

It’s all very tantalising when you can dine at European supercar horsepower tables for the cost of a drive-thru. Although in the case of this British-made Sutton CS700, it’s quite an expensive drive-thru.

Built by the ‘Bespoke’ division of exotic car dealer Clive Sutton, the CS700 is the UK’s specialist take on the aftermarket, all-American muscle-car dream. With a potential for as near as damn it 700bhp, you can have a rear-drive Mustang with the performance a 911 Turbo. 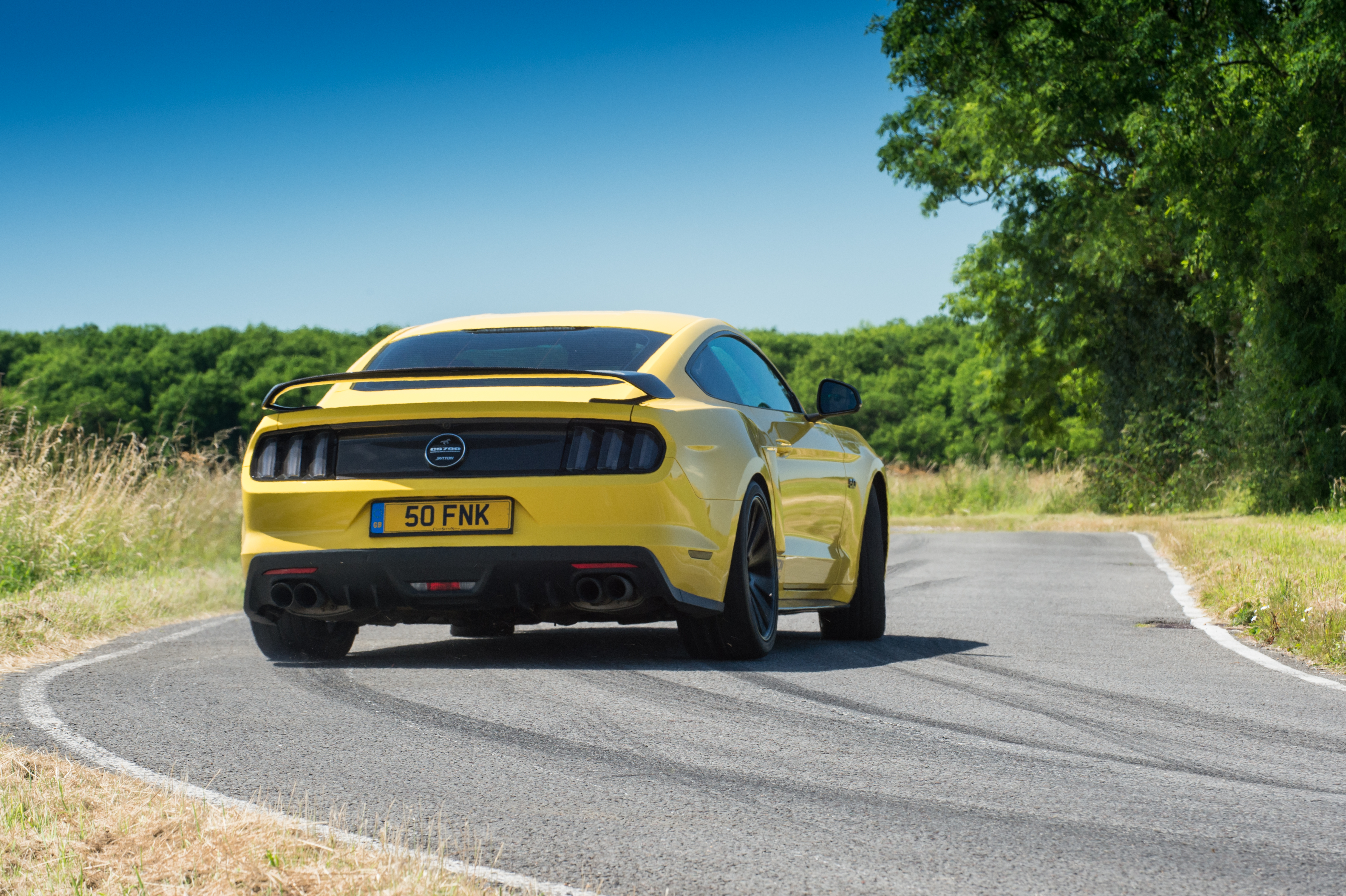 As the name suggests, 700hp (690bhp) is possible, but to achieve this you’ll need the larger throttle bodies and the new carbon intake system that Sutton also offers, for a further £1134. This rather conspicuous demonstrator does without both of these, so it’s just the 643bhp to digest today. The other big mechanical change is to the chassis, which features KW’s Variant 3 adjustable coilovers, complete with a 25mm front and 15mm rear drop in ride height, and lighter 20-inch alloys, all for £6283.

In the visual stakes the CS700 doesn’t hold back. Like the look of the carbon bonnet and other aerodynamic accompaniments? That’ll be £9651. Inside it’s a more subtle approach, with only the dashboard being upgraded (for an extra £2580), but don’t be fooled by its carbon appearance and dismiss it as a mere fascia – the Sutton team removes the standard item and builds a new one entirely out of carbon.

One criticism of supercharged engines is that they never provide that kick in the back that the performance figures suggest. This isn’t helped by the supercharger needing to draw so much power from the engine in order to get going. Squeeze the throttle of a 650bhp turbocharged car and even with a hint of turbo lag it will still make its presence felt like a hidden chilli in a chicken korma. It’s why a well-sorted turbocharged engine can be so thrilling.

It’s also the root cause of why the CS700 can feel a little less than tantalising after an initial taste. The natural grunt of the 5-litre V8 is there, although it still feels a little lazy on initial throttle input, as per the standard car (and not helped by this car’s six-speed auto). There’s a faint whine from the ’charger with every throttle serving, but if you keep the revs below 4000rpm, you’re only sampling the plain V8 with none of the ’charged side orders. Switch the engine map to Sport+ or Race, pull the gearlever back to S and use the paddles to change gear and the CS700 is in its most responsive setup. 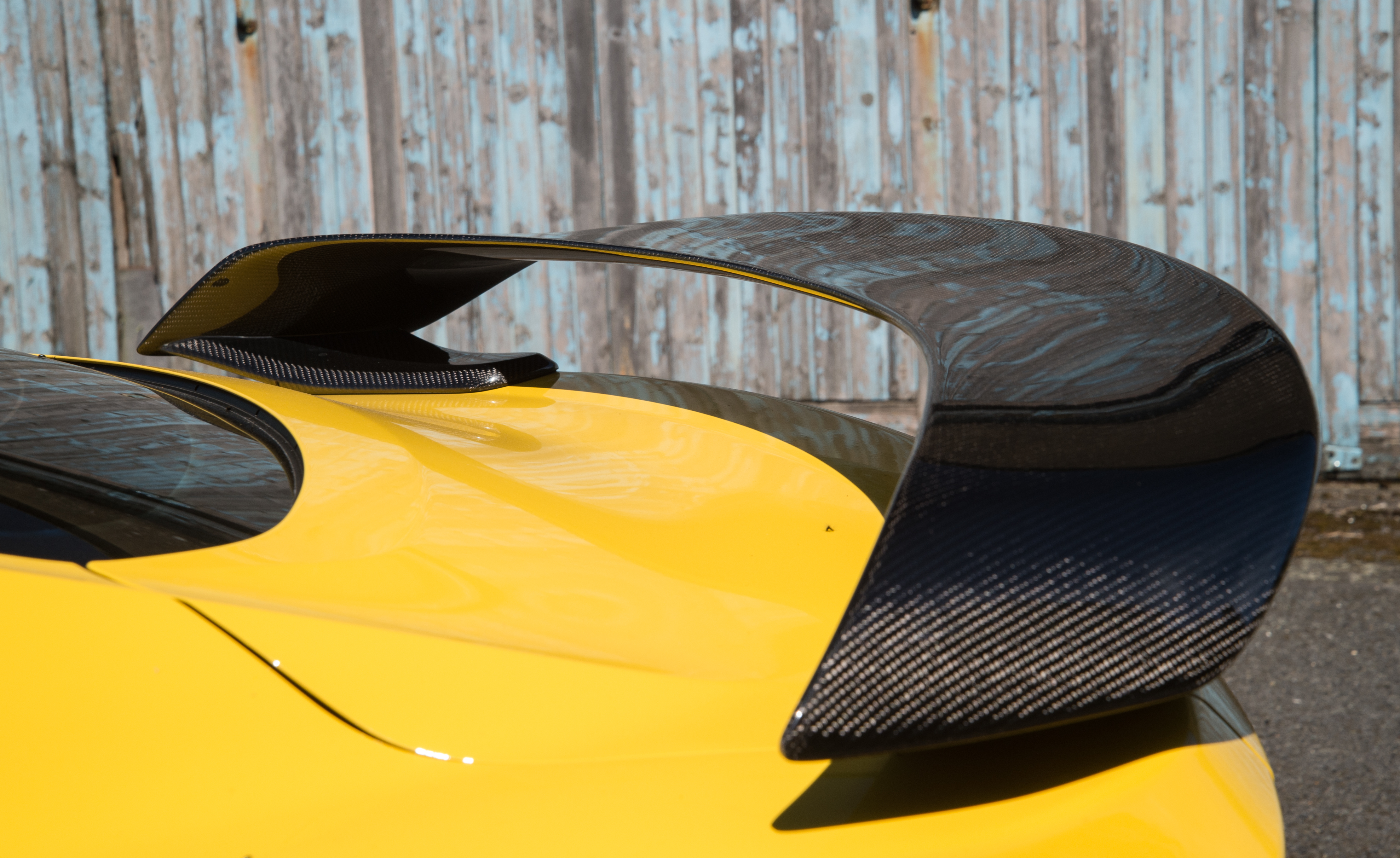 The noise hits you first, the whine building with gusto and adding meat to the soundtrack with every couple of hundred extra revs. Hit 4300rpm and you can do little but hold on and hope your right finger pulls back on the upshift paddle before the tacho’s needle spills over the red line. As you get to 5000rpm the engine turns up the heat, the whine turns into a howl and that gradual climb in performance you associate with a big-capacity V8 is switched to a frenzied and frantic delivery you’d expect of a highly strung four-cylinder engine. But it never feels 644bhp- quick, not like a McLaren 650S does.

Other elements of Sutton’s work are instantly more rewarding, such as the chassis changes. The KW coilovers offer a wider spread of control and answer some of the criticism of the standard car’s low level of feedback. They would also, we suspect, tighten the chassis further on track, too.

Ultimately, though, this car is about pace, and sadly the CS700 never feels that quick. In bursts, on arrow- straight roads where you can focus purely on going quickly in a straight line, the rate at which it piles on speed is impressive, but any of today’s turbocharged cars feel equally as quick and Jaguar’s 5-litre supercharged V8 is a far better balanced engine that serves up its performance in a more satisfying and palatable way.

When Mustang values drop to Fiesta money, the temptation of a near-700bhp engine conversion will be hard to resist, but at more than £72,000 for a car with all the kit, the CS700 is too expensive to stomach for the improvements it brings. However, for £5068 you could have a CS500, which includes a more freely breathing air intake and a switchable exhaust (and the rear valance) to bring about 493bhp, which sounds like the best choice on the menu.

It’s a big year for BMW M, so to begin the celebrations, it’s bringing back some iconic heritage cues
Skip to HeaderSkip to Content