New 2018 Ford Mustang revealed for Europe ahead of Frankfurt

Refreshed Mustang to offer a raft of new features alongside styling, suspension and engine updates 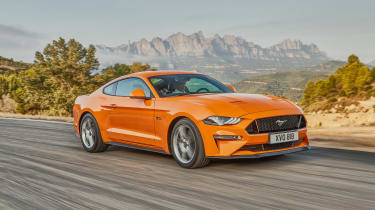 In line with the updated Mustang that has recently gone on sale in the US, Ford has released UK specific details of the revised car that will reach customers early next year.

Aside from the styling, engine and technology upgrades the biggest news coming from Ford is that this new model will feature an optimised suspension set up for Europe, hopefully addressing some of our issues with the occasionally wayward handling of the previous car.

> Click here to read our range-wide review of the Mustang

This optimised suspension tuning is based around new Magneride system, essentially the same magnetorheological dampers that underpin everything from the Mustang GT350 (which we are currently denied in the UK) right the way up to Ferraris and Lamborghinis. With the intention of tightening up body control without a deterioration in ride comfort, the dampers are controllable through the Mustang’s selectable driving modes. 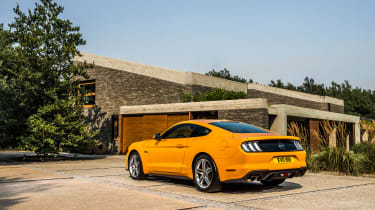 As in many other cars, these driving modes control the steering, throttle and gearbox (in automatics). As part of the MY18 updates, the 2018 Mustang will also feature a ‘Good Neighbour’ mode, essentially a quiet start function.

Ford has also subtly massaged the GT’s 5-litre V8 engine, now producing 444bhp – up from 410bhp in the current car. The power increases have come from the introduction of Ford’s dual-fuel injection system, utilising both direct and port injection. As standard the V8 will be connected to a six-speed manual gearbox, but Ford is also offering its new 10-speed automatic with steering wheel-mounted paddle shifters as an option.

Ford will also continue to offer the Mustang with a four-cylinder Ecoboost option, now developing 286bhp. To try and improve response, Ford has also engineered an overboost function into the Ecoboost engine when paired to the automatic gearbox, momentarily upping torque after gear changes. 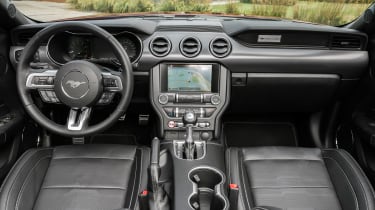 Aesthetically, the exterior changes to the revised model consist of a new, lower nose and re-profiled bumpers front and rear. A detail not commonly picked up on the current GT350 is the lower grill and reset headlights. To mimic this, Ford has used the same styling cues with this facelift, reshaping the headlights and repositioning them lower. There are also new colour and wheel options, too.

Inside, the Mustang receives a new driver information screen replacing the traditional analogue dials with a customisable 12-inch screen. Like many of these systems, the dials change depending on driver mode, including a video game style animation when the contentious line-lock mode is activated.

> Click here for our review of the Chevrolet Camaro Z/28

Not due to reach showrooms until next year, Ford’s American muscle car offering in the UK will never be as polished as rivals like the BMW 4-series or Audi A5, but the updates will hopefully add a touch more sophistication to the Mustang’s overall package.