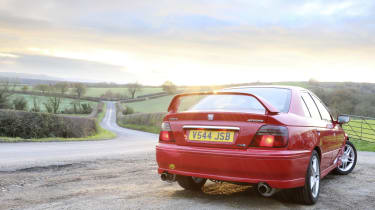 Want even better value than an EP3 Civic Type R? The Accord Type R is the car for you. Prices start at just over £2000 these days, which gets you a four-door saloon with typical Type R attention to chassis stiffness and weight saving, with a 2.2-litre, 209bhp engine hiding behind its fairly bland nose.

On launch in 1999, it conquered all: evo pitched it against rivals from Audi, Alfa Romeo, Ford and Vauxhall in issue 012, dispatching them easily. Its handling really did give it the feeling of an up-scaled Integra Type R and made other practical saloons feel a little limp.

The low prices do mean that many Accord Rs have suffered at the hands of careless ownership and others have been modified – some sympathetically, others not so much. Finding a good one is becoming difficult, so make sure any you check have had regular oil changes, doesn’t have crunchy synchros (particularly on fifth) and that the automatic beam adjusters for the headlamps work as they should.

Find Honda Accords for sale on Classic and Performance Car 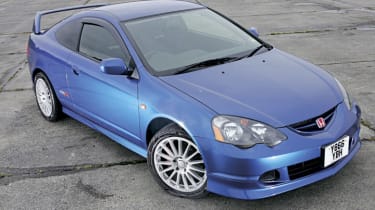 For a car that was never officially imported to the UK, it’s certainly not difficult to find the sharper DC5-generation Integra Type R over here. Launched at a time when exchange rates made grey imports favourable and bolstered by a brief spell of BTCC success, the sharp-suited coupe is a tempting option.

Using much the same drivetrain as the EP3 Civic – a 2-litre, K20A four-cylinder – it made more power than UK Civics, at 217bhp. A limited-slip differential was standard too, and it’s certainly the more stylish of the pair.

Prices start at just under £7000 at the moment. The best examples still attract five figures, but unlike some of the cheaper Type Rs in this list, the generally higher prices mean DC5s should be a little better looked-after. Modifications will still be prevalent, but the number of unmodified examples available mean you shouldn’t have to account for someone else’s dubious tastes.

Find Honda Integras for sale on Classic and Performance Car