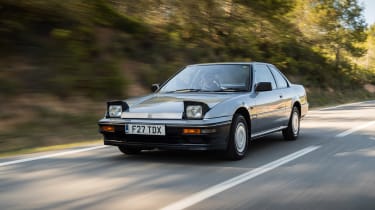 Honda’s Integra Type R will go down as one of the greatest front-wheel-drive coupes ever created, but the lightweight special is far from being the only time Honda has dabbled with the high-revving coupe formula.

While never blessed with a Type R variant, the Honda Prelude instead turned to high technology and increased luxury to attract buyers, variously offering technologies such as ABS, computer-controlled injection, double wishbone suspension, four-wheel steering and of course, Honda’s VTEC engines as it moved through its five-generation run.

Today these cars are often overlooked in favour of Honda’s more iconic performance models, but with a diverse history, from 1970s classic to the comfortable, well-built and powerful coupe that bowed out in 2001, there’s quite a range of driving experiences on offer.

The Prelude story starts in 1978, with a car based largely on the Honda Civic of the time but utilising Accord power and a five-speed gearbox (or three-speed ‘Hondamatic’ auto). As a result, early Preludes are not the technological powerhouses they became in later years, with fairly ordinary MacPherson struts at both ends, a carburetted 1.6-litre four-cylinder making a modest 80bhp, and a top speed of 98mph.

The styling laid the groundwork for later Preludes however, with a distinct three-box silhouette and a passenger layout closer to a 2+2 than a full four-seater, while the sole concession to styling flair was an instrument pack that laid out the tachometer concentrically within the speedometer. 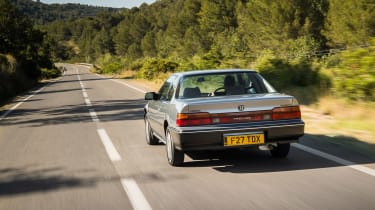 Even in contemporary reviews the first-generation Prelude was described more as a cruiser than a B-road thriller, so they’re perhaps best viewed more as a quirky classic than a serious driving machine. They need commitment to run as a classic though, as while they’re mechanically sound by the standards of the day, corrosion and a lack of replacement parts compromise their survival rate.

The second Prelude, launched in 1982, is more representative of what we’ve come to expect from the model. Aesthetically it’s the archetypal 1980s Honda, with an incredibly low scuttle and bonnet line, pop-up headlights to keep the frontal profile low, and simple but handsome lines.

It also brought with it technology, first with 12-valve cylinder heads and Honda’s eco-friendly CVCC combustion, twin carburettors, anti-lock brakes as an option, and later, a 16-valve head offering a first glimpse at the model’s revvier future. Lightweight and compact, it went toe to toe with cars such as Volkswagen’s Scirocco and a few years into its run, Toyota’s first front-wheel-drive Celica.

The Prelude would come of age in its third generation, launched in 1987. Outwardly similar to its predecessor, albeit longer and wider and freshened up in line with late 1980s styling trends, it also continued to spearhead several of Honda’s latest technological advances. 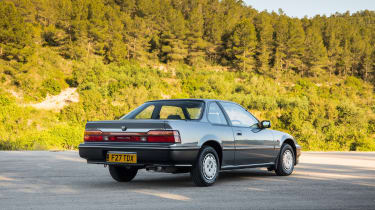 Chief among these, other than the use of double wishbone suspension at each corner (which would become a Honda staple, offered on everything from basic Civics to the NSX supercar) was the world’s first mechanical four-wheel-steering system. A shaft from the rack and pinion set-up up front transferred steering rotation to a differential-like box at the rear axle. This used a planetary gear to first turn the rear wheels up to 1.5 degrees in the same direction as those at the front – for increased stability at speed – and then up to 5.3 degrees in the opposing direction as the front wheels turned further, for low-speed manoeuvrability.

The system made for mighty ability in magazine slalom tests and being fairly handy on B-roads too, while the power from the 2-litre engine (with 2.1-litre variants later available in the US and Japan) meant improved performance over that of its predecessor despite an increase in weight.

Not quite to the same level as the fourth-generation car, though. Honda pushed the boat out even further with the 1991 Prelude, not least with the styling – outside, it was far more exotic than its boxy predecessors, ditching the pop-up lights and featuring a curvy, raised tail. Inside too it was a departure, if less appreciated in the press at the time than it is today – the futuristic wraparound dashboard featured electroluminescent dials.

But it was the implementation of a new 2.2-litre, VTEC-equipped four-cylinder that attracted most attention. Pushing out up to 183bhp (or 187bhp in Japan) it gave the four-pot Prelude enough performance to compete with its six-cylinder rivals of the time, such as the Volkswagen Corrado VR6. The four-wheel steering advanced too, now electronically controlled. A fairly hefty kerb weight belied the amount of technology squeezed into the Prelude’s curvy shape, but in its early years at least the Prelude was praised for its quality, engine and the cross-country pace of its chassis. 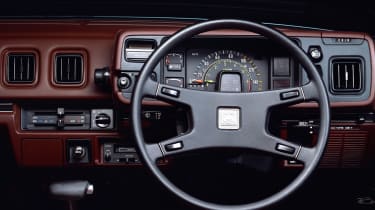 Much of the fourth-generation car’s mechanicals made it across largely unchanged when the fifth-generation car appeared in 1997, but after the stand-out styling of the 1991 car, the last Prelude’s exterior and interior were once again more conservative.

The visual changes were poorly received at the time, though in retrospect Honda’s final Prelude still looks fresh today. With coupe competition now fierce it rarely topped group test tables either, with more involving and exotic rivals such as the Fiat Coupe, Alfa Romeo GTV and the rear-drive Nissan 200SX attracting greater praise. With Honda’s own Integra Type R also joining the scene, the Prelude’s niche was a small one.

Like its predecessors though, the last Prelude always had keen engines, an agile chassis thanks to the latest development of Honda’s four-wheel steering, and of course, Honda’s typical dependability on its side. As prices of earlier models increase, the final Prelude is also now among the most affordable ways to get behind the wheel – though 2.2 models with the manual gearbox, and the bodykitted Motegi versions are most desirable and therefore most valuable. 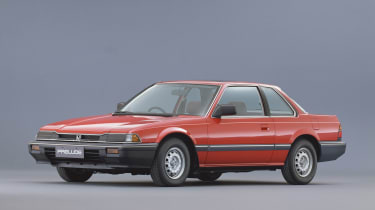 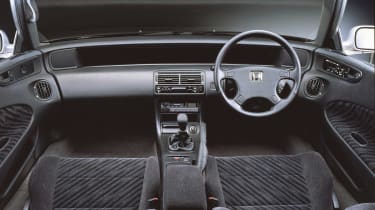 ‘It’s at once a dainty and handsome design, with an ultra-low bonnet line, slim pillars framing the glasshouse, and those dinky steel wheels with their plastic covers. They belie the fact that this EX was a fairly basic car – no 4WS, no air conditioning, a twin-carb 12v four-cylinder making 114bhp rather than a fuel-injected 16v with 150bhp, and a modestly trimmed interior.

‘But it’s a comfortable cabin with outstanding visibility, and Honda’s traditionally low scuttle, which gives you a good view of the road despite a relatively low-set driving position. The steering is positive and throttle response excellent, and while a sticky clutch hampers gearchanges, the shift itself snicks between ratios cleanly and quickly.’

‘Find an open stretch of road and you’ll notice that the engine is distinctly keener to rev and delivers a more exaggerated punch the moment you arrive in the VTEC zone… once you’re there the power keeps on coming right up to the 8000rpm red line. Addictive and terrific fun, the Prelude’s powerplant is further enhanced by a short-throw gearchange that allows you to rocket the stubby lever across the gate.

‘Body roll is non-existent, while the steering reacts quickly and decisively to the smallest of inputs. Few cars in this class come close to matching the Prelude’s appetite for corners. But overall, there’s still something missing from the Prelude package. Sure it’s quick, handles brilliantly and is fastidiously built, but now that Honda has given us the [Integra and Accord] Type R, these qualities just aren’t good enough on their own.’