New Honda Civic driven - a promising start for the next Type R?

Still plenty of work to be done before the Type R arrives, but the new Civic definitely feels like a forward step over the old model 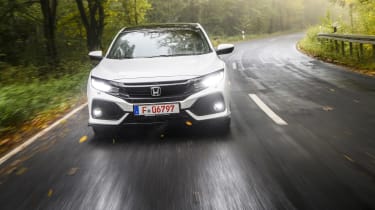 You know that Honda Civic Type R - the one that’s been around for about 18 months now? Turns out that its almost biblically long gestation period has left it a bit short on time - because we’ve already been for a quick run in the car that will support its replacement, and it’s coming soon.

It’s not just a nip and a tuck, either. Honda engineers admit that the ninth generation of the firm’s best-known model has been left behind by the class; the initial belief that its combination of a torsion beam rear axle and non-turbocharged engines could still stack up against the likes of the Focus, Astra and Golf has been proven to be terminally optimistic.

So for the new 10th generation of the car, Honda’s team started with a blank sheet of paper and threw as much engineering resource as possible at the idea of rediscovering what the firm calls 'the essence of the Civic as a car with a sporty driving character'. At one point, a third of Honda Cars’ entire research and development headcount was dedicated to this project. So if there are some parts carried over, the engineers aren’t able to think of them in a hurry. 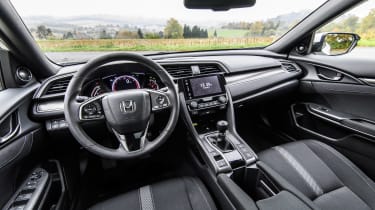 First, the chassis. It’s a larger structure than before, but trick welding, greater use of high-tensile steel and some tweaks to the manufacturing process mean it’s about 19kg lighter than the bare metal in the current car. And it’s a lot more sophisticated with it; the beam has gone, replaced by a multi-link set-up at the rear to accompany the MacPherson struts at the front. You’ll be able to spec adaptive dampers on selected versions, too.

Second, the engines. VTEC remains, but now it’s accompanied by a small turbo that gets an electric wastegate to help it deliver better response more akin to the character of a normally aspirated motor. There will be two petrol options at launch - a 1.0-litre triple produces 127bhp at 5500rpm and 147lb ft at 2250rpm, and the 1.5-litre four-cylinder unit driven here, which offers an almost-punchy 180bhp 5500rpm and 177lb ft at 2250rpm.

There are more engines down the line, of course. In the second half of 2017 there’ll be a 1.6-litre diesel; in pretty close to the same time frame we should see the new Type R. It’ll get the looks of the production concept shown at the recent Paris motor show, and Honda’s engineers have been foaming at the mouth with the prospect of a chassis that can better cope with 2.0-litre turbocharged power. Throw the mooted output of 340bhp at Honda officials and they raise an eyebrow, but only slightly. It’ll still be front-drive, too.

The regular car’s transmissions are a six-speed manual across the range, with a "stepped CVT" as the automatic option on the petrols and a nine-speed torque converter auto on the diesel. The Type R, it will not surprise you, is a shoo-in to be manual only. 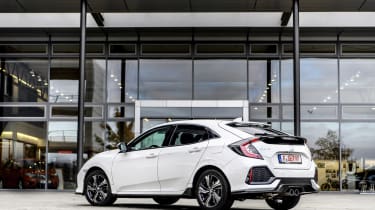 We’ve had but a short drive in the 180bhp 1.5 in Sport trim, which brings a different design of rear exhaust with a pair of central pipes (and loses underfloor boot storage as a result, you’ll be gutted to learn).

Still, it’s encouraging enough, without being stellar. There is undoubtedly a great deal more sophistication in the new chassis; where patchwork road surfaces running close to the end of the road would have upset the Mk9 Civic, the new one stays composed and comfortable over them. It also stays flat during high-speed cornering and feels very composed; the Mk10 has a longer wheelbase than the old car, and it shows in this respect.

Unfortunately, it also makes the Civic seem every millimetre of its larger size. It’s wide and it feels long - almost in the same way as a Skoda Octavia. So while it inspires plenty of confidence most of the time, it doesn’t ever feel particularly agile. It’s a car for smooth, rapid progress and is less happy being chucked down a B-road. Despite this, the steering borders on over-assistance - and it’s numb and a poor communicator.

The 1.5? It’s a reasonably gutsy performer, actually, though Honda devotees will find it odd to be able to rev it out to 6000rpm without actually needing to. In fact, there’s a decent spread of torque from around 1500rpm up to 3500rpm, allowing you to short-shift but still drive briskly. The gearbox has a typically pleasing Honda shift action, too, and the new, lower seating position gets your bum down a bit closer to the action. It’s still pleasant to drive, without ever really being entertaining, though. 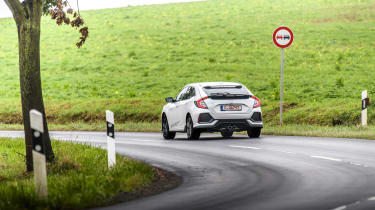 The adaptive dampers make a subtle difference, frankly, between their two modes - "regular" and "dynamic". The ride does stiffen a little in the more focused setting, but not to the point where the Civic feels nimble more than stable. The inclusion of the system at all is a potentially interesting development for the Type R, though; perhaps Honda’s engineers will use it to make that car usable over a wider range of roads and surfaces.

Inside the Civic, Honda has abandoned the old dual-level dashboard design for something that’s a lot more conventional. The instrument panel mixes gauges with a TFT screen showing speed and revs. It can also display other information, such as turbo boost and navigation instructions from the new, more fully integrated infotainment system.

The new Civic is a promising entry (re-entry?) into the mainstream hatch market, but while it is more composed and accomplished than the car it replaces, it’s still not quite as entertainingly pointy as a Ford Focus or even a SEAT Leon. The engineers on the next Type R have a solid base on which to work, but work they must; even with 180bhp, this does not feel like 90 per cent of a hot hatch.