Steve Sutcliffe has never driven the North Coast 500, so Adam Towler took him for a Scottish adventure in a pair of Hyundai’s latest hot hatches 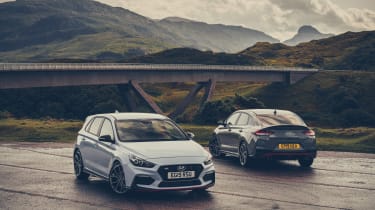 Before you board a ferry or a plane in search of the best driving roads in the world, just consider for a moment the North Coast 500. A stretch of road that loops around the most northerly point of mainland Britain that was specifically designed to attract tourists and driving enthusiasts to this remote part of Scotland.

And it worked. evo was drawn here in 2015 when we brought 11 of our favourite cars to judge our Car of the Year. As a result, we know it is one of the best driving routes in the world, full of spectacular scenery, light on traffic with a great variety of challenging roads.

But amazingly, evo Contributing Editor Steve Sutcliffe has never driven the NC500. evo’s Deputy Editor,, Adam Towler has completed it twice before however, once for eCOTY and later to put McLaren’s Senna through its paces. Clearly they were memorable trips, but he wanted to try it again in something more….. Obtainable and better suited to the route’s twist, turns and hairpins. There are sections of the NC500 where a supercar is just too big, or too outrageous.

Neither Adam or Steve make good passengers, so we have a plan. With a car each, our adventurers will go their separate ways from the NC500’s nominal starting point in Inverness, with Steve travelling anticlockwise in an i30 Fastback N and Adam heading in the other direction in Hyundai’s impressive hot hatch. They will meet on Kylesku Bridge, roughly halfway around the loop to compare notes. Watch the video here.

The perfect car for this type of trip is a hot hatch. They are perfectly proportioned for the roads that make up the majority of the NC500 route, have usable performance, responsive engines and agile handling. A good hot hatch will be comfortable on the journey up and won’t bankrupt us with fuel costs.

One of our favourite hot hatches of the moment, the Hyundai i30 N, was developed on and around the Nürburgring in Germany, and many of the roads on the NC500 are remarkably similar – a mix of fast, sweeping main roads and twisting hairpins, lumps, bumps and cambers, which mean that the i30 N should work well here, if the engineers have done their homework properly.

For this first half of the route, it’s probably fair to say Adam has got the better deal. Large parts of his trip are a mix of quick, challenging A-roads with a section of tighter, more technical B-roads providing a further challenge. But that’s one of the big appeals of a hot hatch – the duality it offers and its ability to turn its hand at everything thrown in its way. The i30 N is just fast enough so you can stay legal and still have fun.

It’s when the road narrows that the first of many ‘wow’ moments is delivered, as Loch Maree heaves into view on the A832. Crest the hill and there it is at the bottom of a valley, at the end of a fast, gently curved road that you'll want to stop at the viewing point and take in the view of as much as you want to drive it. 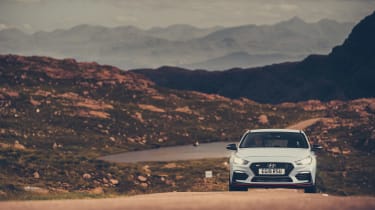 But there are more impressive scenes, to come, yes seriously, when Applecross Pass presents itself. It has been called Britain’s most dangerous road because the weather can make its series of hairpins and single tracks treacherous, especially if wintry conditions have washed gravel onto the surface or left gaping potholes. Tighter than the Col de Turini, a hot hatch fits Applecross perfectly. It’s best to get a clear run but you'll want to do it more than once, if only to stop and drink in the view across to the Isle of Skye. It’s one of the most beautiful sights in Britain. One that leaves Adam feeling guilty he’s given Steve the NC500 short straw.

For the first 100 miles he probably has. Steve is unconvinced, his trip more mile munching than awe inspiring, and he’s questioning why they didn’t just pop into Knockhill circuit to get some kicks instead. The roads are pleasant enough, but not as spectacular as he’d been promised.

All that changes when he reaches Durness and one of the most northerly points of the UK mainland. Suddenly it all makes sense as the road tightens, the landscape opens up and the i30 N Fastback begins to remind our NC500 virgin why he made the long journey north.

It’s on roads such as these that driving modes in performance cars come into their own. It’s where sharper throttle responses, tighter diffs and a more tied-down chassis allow for a more expressive character to suit the route ahead. As both Adam and Steve cover more miles along the NC500, their settings become more focused. ‘N’ is too extreme for the road, but there’s a balance to be had via ‘N Custom’ (where over 1900 permutations can be selected), and it’s only when our explorers meet on the iconic Kylesku Bridge they discover they both settled on near identical set-ups.

A route such as the North Coast 500 is not one to be rushed. It needs to be explored, savoured, run multiple times. And the views, you need time to stop for the views. And the tea shops. Crucially, you need the right car. We took 11 very different evo cars to the NC500 in 2015, from hot hatches to supercars and while the latter were always thrilling, it was the former that felt more at home. Just as these two did today.