Infiniti’s concept trio previews the future at Festival of Speed

Three models will go on display, each influencing the look of Infiniti's future vehicles 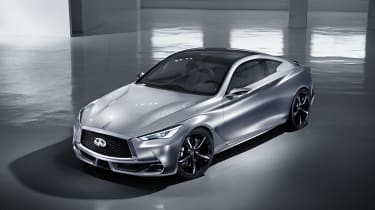 Infiniti has seemed like a brand without real direction since entering the UK market, living under the shadow of Japanese rival Lexus – itself cowering under the sales might of the German premium brands.

If Infiniti has potential though, it’s in design. Like Lexus, its current generation of models is breaking free of bland homogeneity and heralding some truly striking shapes, many of which have production potential.

Three of these production-ready shapes will appear at the upcoming Goodwood Festival of Speed, alongside the more voluptuous but less feasible Vision Gran Turismo Concept.

Of the models set to reach production, the Q60 Concept previews a new 2+2 coupe set to replace the existing Q60 and challenge the likes of BMW’s 4 Series and Audi’s A5. Powered by a 3-litre V6 and rolling on 21in wheels, the Q60 may change slightly before production, but otherwise the style you see should reach showrooms largely intact.

There might be more variation when a model inspired by the Q80 Inspiration concept arrives, but the five-door fastback invites comparison with other coupe-inspired luxury vehicles like the Audi A7 and Mercedes-Benz CLS. Currently, Infiniti’s biggest saloon is the Q70, so consider the Inspiration its indirect successor.

Finally, Goodwood punters will get a chance to look at the QX30 Concept, which debuted at the Geneva motor show earlier this year. Already confirmed for production, the QX30 is a small crossover taking aim at Audi’S Q3.

It’s a significant vehicle, not just because luxury crossovers are big business right now, but because Infiniti has already confirmed it will be built at Nissan’s UK manufacturing facility in Washington, near Sunderland. It’s set to go on sale towards the end of 2015. 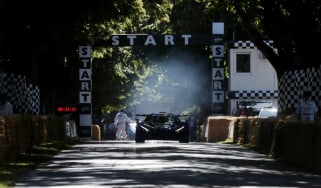