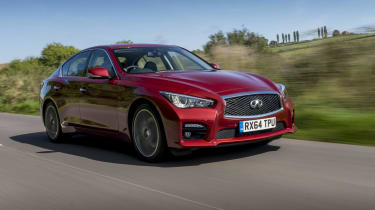 You’d be forgiven for forgetting the Infiniti Q50 exists. On roads roaming with its German rivals – BMW 3-series, Mercedes C-class and Audi A4s – the Japanese sports saloon is not a common sight.

The Q50’s latest round of revisions is unlikely to change that, but it should increase the car’s appeal for that hardy band of buyers for whom even a Lexus IS is too predictable a choice.

New for 2016 is a 3-litre, twin-turbocharged V6. The new VR30 unit is related to the VR38 found in the Nissan GT-R, albeit lower in capacity. Infiniti says it offers a best-in-class power to efficiency ratio: High-pressure direct injection, variable valve timing, optimised turbine blades and a turbine speed sensor allow it to deliver high power with relatively little thirst.

The unit produces 400bhp at 6400rpm – not far at all from the BMW M3’s 425bhp figure – and 350lb ft of torque from 1600-5200rpm. While not pitched as a direct competitor to cars like the M3, figures like those should deliver entertaining performance.

Below the range-topping V6, 2-litre turbocharged petrol and 2.2-litre diesel models remain available – the former with a 208bhp maximum output, the latter 168bhp with 295lb ft of torque. A hybrid is also available, producing 360bhp from the combined efforts of its 3.5-litre V6 and electric motor. All Q50s come with a seven-speed automatic transmission as standard. 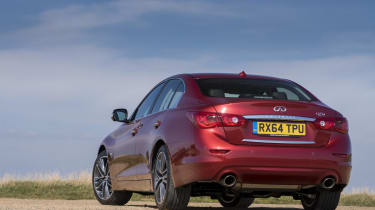 Revised suspension settings for the front double wishbones and rear multi-link setup should ensure a better ride and handling balance, as should revised anti-roll bars front and rear. 3-litre models in Sport trim get electronic adaptive damping as part of a Dynamic Digital Suspension setup.

Infiniti has also tweaked the Q50’s optional steer-by-wire system. A much-derided feature of the existing model, the Direct Adaptive Steering has been retuned for greater feel. As before, the system can be adapted to meet the driver’s needs using a Drive Mode Selector – expanded functions include Personal, Standard, Snow, Eco, Sport, and Sport+.

Those still sceptical of the system’s potential benefits will be pleased to hear the new 400bhp V6 goes without, instead utilising a standard electric power steering system dubbed ‘Rack’. This too can be tuned using the Drive Mode Selector. Standard on other models is a regular hydraulic setup.

The new Q50 will arrive later in 2016. No pricing or specification details have yet been announced for the new model.