We take a closer look at Jaguar Heritage’s valuable collection 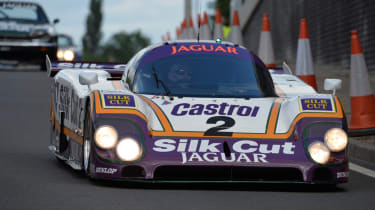 We weren’t the only ones to draw similarities between the thunderous tone of a convoy of classic Jaguars and an approaching formation of 1940s enemy aircraft. Thankfully for the citizens of Coventry, unlike the scenes of seven decades ago, it was the former that was headed for the city centre early last Saturday. Jaguar Heritage’s fleet – valued at an estimated £60million - was on its way to open proceedings at the 2015 Coventry Motofest.

Leading the fleet of historic cars was Andy Wallace, behind the wheel of his 1988 Le Mans winning XJR-9LM; bringing up the rear was the 1938 SS100, the first car to bear the Jaguar name. Sandwiched between these was one of the most enticing selections of Jaguars on the planet; it was a sight (and sound) like no other.

Below, in no particular order, we look back at five of our favourites from that unforgettable Jaguar Heritage Motofest group. 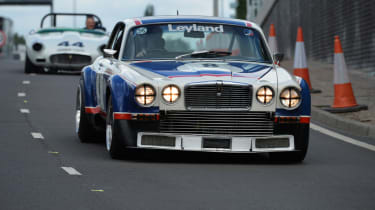 It might be based on a mid-seventies executive saloon, but the XJC Coupe is a seriously fast racing car. Broadspeed Engineering was tasked with tuning the heavyweight XJC’s 5.2-litre V12 to produce 600bhp, with the car’s body shell being built up to Group 2 specification.

Though the car was incredibly fast – it broke several lap records and frequented the front row of the European Touring Car Championship grid – it proved to be incredibly unreliable. The qualifying lap times confirmed its potential, but Jaguar’s then owner, British Leyland, pulled the plug on the project before a it could win a race as costs spiralled.

Racing woes aside, the car looked outstanding in Coventry. With its bulging arches and gargantuan dimensions, the XJC was amongst the most purposeful looking machines to lay rubber on the ring road. Whether it succeeded on the race track or not, it was quick to become a crowd favourite in 2015.

Even with the Broadspeed XJC around, it’d be hard to label anything as more purposeful looking than the XJR-9LM. Hunched down low and dressed in iconic Silk Cut livery, the 1988 Le Mans winner is capable of more than 240mph.

One of the three drivers who took the XJR-9LM to victory at the ’88 race was Andy Wallace. On hand in Coventry, the 54-year old talked of the car’s unbelievable high-speed grip - largely thanks to its use of ground-effect aero - and ability to spin up the rears, in fifth, at 160mph, in the pouring rain.

The car, which is famous for ending Porsche’s seven-year reign at Le Mans, is powered by a 7-litre V12. The engine shares some ties to Jaguar’s road going unit, but unsurprisingly, the links are slim because the racing unit produces 750bhp. The car weighs little more than 880kg, giving it a power to weight ratio of 866bhp/ton.

Of course, Coventry’s bumpy roads provided Wallace with little chance to demonstrate the XJR-9LM’s ability. But as its V12 echoed through the tunnels of the ring road, the car’s headlights ablaze, we were given a small insight into what it must have looked like racing down a moonlit Mulsanne Straight. 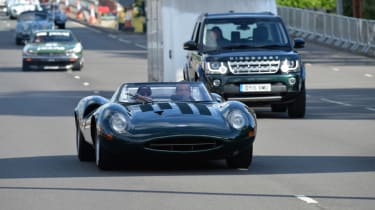 Just one Jaguar XJ13 was ever built. But despite an estimated value of – sharp intake of breath – more than £20million, Jaguar didn’t hesitate at the chance to let the car loose on Coventry’s roads.

The XJ13’s Le Mans racing intentions are clear from its mid-mounted engine layout, which places the 5-litre DOHC V12 directly behind the driver. But despite its clear focus, the XJ13 programme plug was pulled before the car ever turned a wheel on track.

Though it was innovative for its time, the arrival (and dominance) of Ford’s GT40 convinced Jaguar (and then new owners BMC) that far too much money would be required to develop the XJ13 into a competitive racer.

As a result, the low-slung XJ13 prototype never took to competition. It did leave behind a legacy of V12 Jaguars however, including the E-type and its racing equivalent, the Group 44 E-type – one of which was part of the 2015 Motofest convoy. 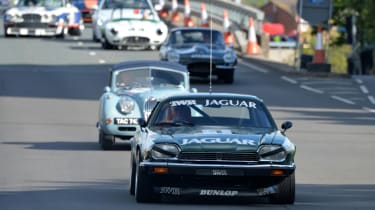 If the TWR XJ-S looks familiar, it’s because evo’s Richard Meaden sampled it back in issue 192. ‘When the V12 catches, it makes everyone around the car wince, but with each prod of the throttle the frowns stretch into involuntary smiles,’ he said, and that sentence was certainly true on Saturday.

As loud as its unsilenced V12 is, it was the XJ-S’ racing pedigree that drew in most onlookers in Coventry. Built to 1980s Group A regulations, the Tom Walkinshaw car turned blistering pace into four race wins and the drivers’ title in the 1984 European Touring Car Championship. The car even went on to win at the Spa 24 Hours, Jaguar’s first 24 Hour race win since the D-type won Le Mans in 1957.

Many argued that the TWR Jag stretched the rules with its highly developed engine and chassis, but the car was undeniably disadvantaged by its hefty 1400kg weight. To compensate, its 5.4-litre V12 was tuned to produce (an estimated) 500bhp. In Walkinshaw’s hands, it was good for 180mph.

Though the Coventry ring road provided little chance to demonstrate the XJ-S’ performance, we’re sure the V12’s feral scream could be heard powering out of the temporary hairpins for miles… 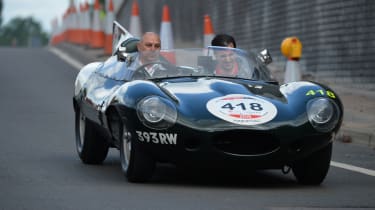 Sat next to the XJ-S, the Jaguar D-type looked tiny, and almost like it was standing on tip-toes, with a ground clearance several times the height of the ground-hugging XJ-S’. But as confirmed by the British Racing Green car’s rear stabilising fin, it’s a proper racing car.

More evidence came as the D-type’s 3.8-litre straight-six burst into life, refusing to tick-over smoothly and requiring a constant input of revs to avoid stalling. It might be small, but it’s loud and it’s raw.

It’s also valued at an estimated £10million, partly thanks to the fact it enjoyed such dominance at Le Mans. Built with an advanced (for the time) monocoque chassis, the D-type’s most successful year was in 1957. Not only did Jaguar win the prestigious Le Mans 24 Hours, but all five of its D-types finished in the top six.