The Eagle Lightweight GT is the Singer of E-Types 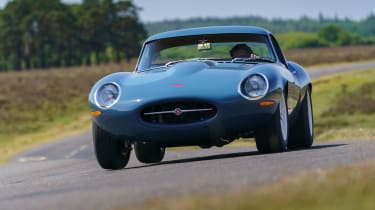 Eagle began fettling Jaguars in the mid-90s, creating some of the very best E-Type restomods we’ve seen to date. Following the Low Drag GT and Speedster, Eagle’s latest special is called the Lightweight GT, paying homage to Jaguar’s 1960s racers. Make sure you don’t miss next month’s issue (276), as Henry Catchpole takes it for a drive…

Though only a dozen were produced, the E-Type Lightweights of 1963 are often considered to be the pinnacle of the iconic British sports car. To bring it’s interpretation of the rare E-Type to the road, Eagle has employed its decades of expertise, cutting edge technology and a staggering 8000 hours of craftsmanship to create what it believes is the ultimate E-Type.

As with most of its models, the Lightweight GT starts life as a Series 1 donor car stripped down before 2500 hours are spent hand-forming its bespoke, lightweight aluminium body. Though its appearance may look similar to normal E-Types, subtle adjustments are made to introduce a more muscular appearance, with wider arches, lower sills and more rake to the windscreen. Contemporary elements such as flush indicators, frameless doors and remodelled, 3D-printed seat controls are a testament to the brand’s attention to detail.

Though its aluminium bodywork reduces weight, this isn’t enough for Eagle. Inconel and titanium are used for the exhaust system, with magnesium adopted for the 16" wheels, hubs, sump, gearbox, and differential housing. Tubular driveshafts, lightweight wishbones, and even a lightweight lithium battery are also utilised. Eagle even uses three-eared aluminium spinner nuts for a marginal reduction in unsprung mass. The result? A 1017kg dry weight. 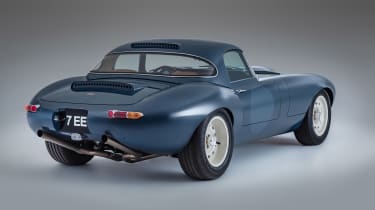 Under the bonnet lies Eagle’s 4.7-litre take on the straight-six you’d find in the C and D-Types that saw victory at Le Mans in the 1950s. Bespoke components such as a new crankshaft, pistons and con rods are employed for improved response and reliability, while fuel injection comes via trio of Weber carburettors and a carbonfibre antechamber.

These additions all help the E-Type produce 380bhp at 5750rpm with a peak of 375lb ft of torque - that gives it a power-to-weight of 380bhp/ton. Though straight-line speed isn’t what such a car is about, it’ll still cover the 0-60mph sprint in sub-5sec, with top speed coming at a very respectable 170mph. 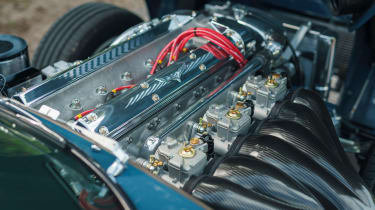 To suit the new footprint, Eagle has carefully adjusted the suspension geometry to suit the characteristics of radial tyres, while adjustable Ohlins dampers running bespoke spring rates have been tuned to ensure long distances can be covered in comfort.

Pricing isn’t quoted for any of Eagles creations, however with the sheer number of hours put into each car and just 17 of its specials ever produced, it’s safe to say that you’ll need a rather healthy wallet.

In evo issue 276 Henry Catchpole puts the Lightweight GT through its paces. To read our verdict, pick up a copy when it hits shelves next month. Scroll on to find out how to get yours.