With die-for looks and effortless performance, Jaguar's E-Type was always going to be a success 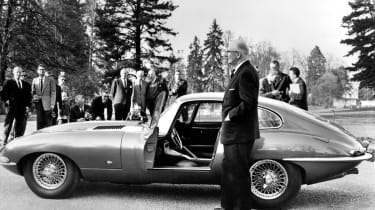 There are just six cars on permanent display in New York’s Museum of Modern Art. Most of this small collection recognises innovative design (like the Smart ForTwo) or historical significance (VW Beetle), but if any of this half-dozen comes close to being a true work of art, the dark blue E-type roadster is it. Ironic, then, that the E-type’s form was defined by science, specifically the search for aerodynamic efficiency.

Until the E-type, Jaguar co-founder Sir William Lyons had styled all his company’s road cars. His work included the XK line of sports cars, which by the late ’50s had evolved into the XK150. In its most potent ‘S’ form, the XK engine, bored out to 3.8 litres, offered some 265bhp, but by now the car that housed it was showing its age and needed to be replaced.

As Jaguar had been enjoying great racing success with its C- and D-types, including five Le Mans victories, it was almost inevitable that the company’s next road-going sports car should take more than a little inspiration from its circuit racers. It would start with the bodywork, which would be shaped not by Lyons, but by Malcolm Sayer, the aerodynamics engineer who had been responsible for the C- and D-types.

Beyond the scale models used for wind-tunnel testing, Sayer’s design for the E-type, as the new car would be known, would first be seen in the E1A prototype roadster of 1957. Of particular note was the length of the bonnet. It wasn’t merely for show. Not only did it allow the engine to be mounted further back than in the XK, helping weight distribution (51:49 front:rear in the first production E-types), it also meant the car would be able to accommodate whatever engine the company decided to give it.

Copying the arrangement from the D-type, the engine and front suspension were attached to a front subframe that was in turn joined to the monocoque passenger cell at the bulkhead. Like the racers, E1A’s body would be aluminium (hence the ‘A’ in the car’s designation), but this was only because it was easier to work with for prototyping purposes – the production car would use steel instead.

Although the E-type would be launched with the 265bhp, S-spec 3.8-litre XK engine from the XK150, E1A made do with a 2.4-litre six from the Mk 1 saloon. But this mattered little, because E1A’s primary purpose was to test the new independent rear suspension being developed for the E-type. The work of Bob Knight – and reputedly coming about after Lyons bet him a fiver he couldn’t design an independent set-up within a month – it was a first for Jaguar and promised to bring a more supple, refined ride than the live axle arrangements the company’s road and race cars had previously employed.

E1A would be joined by E2A, another roadster, this one closer in its appearance to the final production car. E2A’s role was to test the new car’s suitability as a racer, and to this end it was equipped with a 2997cc engine that achieved 293bhp at 6750rpm. When American racer Briggs Cunningham saw this prototype at the factory he persuaded Jaguar to allow his team to compete with it at the 1960 Le Mans 24 hours. Alas, a head gasket failure meant the car retired before the finish, but it made an impression nonetheless, not least by setting the fastest lap time of the race. By then, though, E2A needed to prove nothing as far as Jaguar was concerned – it had already helped the company get to a point where its new sports car could be put into production.

The E-type would make its debut at the Geneva motor show in March 1961. It was an instant hit with press and public alike. But then with those looks, the promise of 150mph performance, and a price half that of rivals from the likes of Aston Martin and Ferrari, it was never going to be anything else.