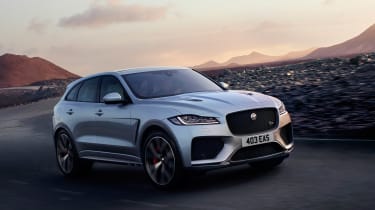 Jaguar has released a short clip (below) of the F-Pace SVR in action ahead of the model hitting showroom floors in summer 2018. It’ll arrive well-armed, too, fitted with Jaguar’s staple performance engine, the supercharged 5-litre V8. The SVR has been priced at £74,835 to reflect its flagship status.

There’s no new information to draw from the video. However, it reminds us of the sonorous aural qualities of the aforementioned V8. Applied here in the range-topping F-Pace it promises 542bhp and 501lb ft of torque, which translates to a 0-62mph time of 4.3 seconds and a 176mph top speed.

In the power and torque stakes the F-Pace SVR has the Alfa Romeo Stelvio Quadrifoglio and Porsche Macan Turbo PP licked: the Italian stands at 503bhp and 442lb ft, the German at 434bhp and 443lb ft. The Mercedes-AMG GLC63 S 4Matic+ is also behind on power at 503bhp, put just pips the Jag on torque with 516lb ft.

At 2025kg the F-Pace is the heavyweight amongst its closest rivals – both the Macan and Stelvio carry weight advantages that run into three figures. That said, the fastest F-Pace currently offered, the F-Pace S, is an impressive steer and an evo SUV favourite, so with a range of SVR chassis modifications courtesy of Jaguar’s Special Vehicle Operations department, the weight might not prove too great an issue for the more powerful version.

The SVR F-Pace will benefit from an electronically controlled LSD, retuned dampers, thicker anti-roll bars and revised spring rates – 30 per cent stiffer at the front, 10 per cent at the rear. A 5 per cent reduction in body roll is claimed.

Two new design of alloy wheels are available for the F Pace SVR. A 21-inch wheel is fitted as standard, while the 22-inch items are 2.4kg and 1.7 lighter front to rear. Both wheels are forged aluminium designs and sit in front of uprated, and larger brakes (395mm front discs, 396mm rears) and the rear wheels are 25mm wider than the front to improve handling.

It isn’t just the wheels that set the SVR apart from the more regular F Pace models. The bonnet features two cooling intakes for the engine, there are also larger air intakes in the front bumper, and bigger gill-style vents help air escape from the front wheelarches, lowering pressure and reducing lift while also benefitting brake temperatures. A set of black wheelarch extensions and lower body mouldings add to the car’s aggression.

The rear bumper has been redesigned to accommodate a new quad-exit exhaust – the active system varies the exhaust's volume while also contributing to the engine’s power output. The system is also 6.6kg lighter than the standard F-Pace’s exhaust.

Inside the new F Pace model there’s an SVR badged steering wheel with gearshift paddles mounted to it. There’s also a pair of supportive bucket-style front seats trimmed in quilted leather similar to those in the F-type SVR while the rear seats, rather than being a simple bench, are also more sculpted too. The standard F-Pace’s rotary gear selector has also been replaced in favour of the joystick-style selector found in the F-type.

The regular F-Pace has impressed us – it’s as fun and as interesting as you’d really expect of a modern SUV of its size – so it should make a good base for a more powerful, performance version. But the SVR will have to be more than just good to take on the Stelvio Quadrifoglio and Macan Turbo Performance Package. 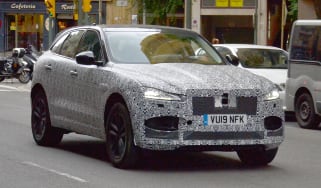