The S-Type’s successor is here, but can it follow the XK to success? 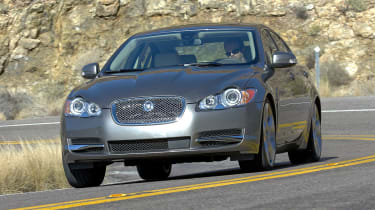 The interior of Jaguar’s supercharged XF SV8, Tortilla Flats, Southern Arizona, high noon. If ever there was a time for a little less conversation and a little more action, now is probably it. Not that the conversation has been dull or, so far, detrimental to our speed across the ground. Mike Cross, Jaguar’s quietly spoken chief engineer, chassis guru and drifting savant, is one of those drivers who can segregate completely the processes of driving quickly and speaking lucidly into a journalist’s tape recorder, head cocked slightly towards the passenger seat.

Topics tackled thus far have included staff morale in the uncertain days before Ford revealed Jaguar’s new owner (positive, hopeful), what potential buyers made of the XF (naturally, Cross was the man to demonstrate its capabilities, and he shares some interesting observations about the bidders’ levels of enthusiasm behind the wheel), and steering quality (always number one on his priority list).

But in the middle of answering my question about tyres, and why Pirelli P Zeros are particularly well-suited to the SV8, Cross falls silent. Over the past minute or so I’ve noticed his eyes darting more frequently from the sinuously twisting ribbon of tarmac ahead to check the rear-view mirror. And as I glance at my door mirror, I understand why. What appears to be a small, snub-nosed red truck, clearly American, has positioned itself a few feet from the fast-moving XF’s boot lid and seems eager to go faster. Other than it looking vaguely like a PT Cruiser (a possibility almost too shocking to contemplate), I don’t have a clue what it is and neither, it transpires, does Cross. But his response is immediate. Given the potential for embarrassment – Jaguar’s most potent XF piloted by the man who developed and honed its chassis gets dusted by local hick in farm vehicle – it was never really open to deliberation. Besides, what Cross later describes as his ‘natural competitive streak’ has kicked in and locked down. ‘Looks like someone wants to have some fun,’ he says, simultaneously flicking down a couple of gears with the left-hand paddle-shifter. I switch off the tape recorder and locate the nearest grab handle.

Actually, it’s not strictly necessary. A lingering impression from my time behind the wheel the previous day is of the XF’s astoundingly flat, stable and composed cornering style. According to photographer Andy Morgan, from the outside it never looks as if it’s trying, and the feeling of unruffled calm is carried through to the cabin, the building g-forces smoothly vectored rather than jabbed and thumped. And like the consummate wheelman he is, Cross doesn’t immediately jump to warp speed but slowly winds it up, using as much of the road as visibility will permit, exercising more of the supercharged 4.2-litre V8’s 410bhp down the short straights, braking deeper into bends, punching harder out of them.

It hasn’t worked. The pugnacious red trucklet is still chilling in the Jag’s slipstream, still spoiling for a bare-knuckle fight. Cross reaches over and stabs the DSC button, which loosens the Dynamic Stability Control’s grip on proceedings, allowing more rear slip and attitude adjustment (holding it down for 10 seconds switches it out completely), and asks the XF for all it’s got. It’s a step change, again executed with a sense of serene effortlessness and poise, but now we’re riding the edge of the limits in acceleration, braking and cornering. And I really do need that grab handle.

It’s enough. The red peril – identified a few miles further on as a just-launched 260bhp Chevrolet HHR SS ‘retro estate’ being put through its paces by an American motoring hack – gradually but inexorably drops back, despite the best efforts of its pilot and a chassis tuned and honed at the Nürburgring. Sighs of relief all round.

And proof, if nothing else I suppose, that suspension sorting at the Ring really must work if it can turn a cartoon Chevy wagon into a would-be XF hustler. Just as well Jag tucked away the Nordschleife miles too. But then, with the XK as its starting point, the XF was never going to be strapped for talent in this department. Over a coffee at the Tortilla Flats Cafe, Cross explains: ‘This programme was a little unusual for us because we often have an idea of where we’d like a Jaguar to be and we dimension that to a competitor’s car. But fairly early on with the XF we decided that the XK had the balance of attributes and character that we wanted to put into this car. And because the XF shares many of its suspension components with the XK, it actually made the tuning of the car similar. So it’s XK with a little more comfort. After all, the XF is a car that’s got to fulfil a broader range of requirements.’

Which might just be the understatement of the decade. XF simply has to be a car that’s taken seriously, not just by Jaguar’s new owners (the identity of whom should be known as you read this), but, crucially, by those who, in recent years, have snubbed the legendary marque, maybe with a heavy heart. With some justification, Jaguar believes it’s too good to be turned over by the ‘safe’ German options. Understandably, the company is keen – no, almost desperate – to shed the retro-mired, heritage-looting image of the underachieving X-type, S-type and XJ and cultivate the cool, smart modernism represented by the much more successful XK.

The answer should be as simple as it seems: a thoroughly modern-looking S-type replacement built around XK mechanicals. But nothing is ever really that simple, of course. The reason Jaguar has flown us all the way to Arizona, I suspect, has little to do with opportunities for fast driving on challenging roads (the all-too-short Tortilla Flats stretch represents the sum total of that), but more to do with the wonderfully soft quality of the early winter light. Jaguar wants the car to look its very best, and the XF’s fluid surfaces – what design chief Ian Callum calls its ‘three dimensionality’ – will work better in a soft light than the harsh motor-show spots that perhaps led some to voice doubts about the ‘ugly’ grille and headlights and raise an eyebrow over the profile similarities to the Lexus GS. That said, some of the snappers here in Arizona have complained that it simply doesn’t photograph well anywhere, and history shows that if people don’t like the way a Jaguar looks, they won’t buy it. But Callum is confident it’s a grower, that the naysayers will come round in time.

Inside, it’s easier to fall in love. Tall rear-seat passengers won’t have much room in which to manoeuvre, but the front is spacious and comfortably the class act of the executive saloon sector, drawing together those often conflicting ideals of bold, uncluttered design and a sense of sumptuous sophistication. The effect is massaged by soft leather, the nicely judged use of wood panels and aluminium trim, and switchgear that, at night, is edged in a fetching hue of Motorola RAZR blue.

The rotary gear selector is brilliantly simple and effective, but whether the fact that it rises slowly from the centre console (while the face-level vents simultaneously swivel into action from their blanked-off positions) when you thumb the gently pulsing starter button gets filed under ‘innovation’ or ‘gimmick’ could go some way to making up your mind about the XF. If it doesn’t, this might: Jaguar says that the tiny roundel (apparently inspired by the film Quadrophenia) that you only have to brush with your finger to open the glovebox illustrates the company’s ‘sense of humour’. Apparently it’s something only Jaguar could get away with.

These, I can only think, are the confused musings of a nervous, worried company. Ignore them. And put the styling on the back burner for a while. On the way back from Tortilla Flats the XF does what it does best and flings off the shackles of weight and size. The litheness and agility are inspiring and, although there’s scant opportunity to use all the performance, it feels every bit as swift as the claimed 5.1sec 0-60mph suggests. As the road snakes and kinks through the canyon, the XF steers beautifully, feeling very linear, very connected and very immediate, but with no hint of nervousness. The variable-ratio, variable-assist steering rack is the same as the XK’s, although according to Cross a lot of the car’s steering feel comes from the rear and is partially determined by the way the rear tyres and dampers perform. ‘They were the final fine-tuning elements to get the steering feel where we wanted,’ he explains.

There are no pesky Chevy laundry vans to out-run on the way back, but the XF almost begs to be hustled and leaned on. The adaptive firming of the damping is noticeable over mid-bend bumps at speed, but easy to accept given the great front-end bite on turn-in and modest initial roll. The supercharged car’s 20-inch alloys and watch-strap P Zeros maybe sharpen the edge a little too acutely for some tastes but, on the whole, it’s hard to see how the opposition can better this. The stunningly smooth, fast and almost telepathically responsive ZF auto, the brilliantly weighted and progressive brakes, and the whispering refinement levels all add still more allure and sheen to the £54,900 package.

For me, the driving experience wins the day by a mile. Moreover, parking up at Jaguar’s Paradise Valley base camp, I’ve decided I don’t care what the XF looks like. But, before I walk away, I cast a final glance back and, in the glow of the evening, it looks all right. Perhaps it’s psychological and perhaps it’s the light but, if I were Jaguar, I’d take it as a good omen.