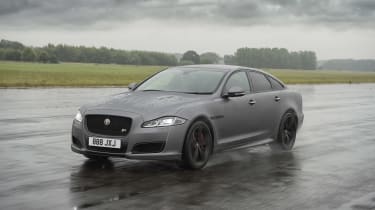 Jaguar has announced a series of updates to its flagship XJ luxury saloon for the 2018 model year. Among them are a suite of new technological features, interior design improvements and a more powerful XJR to top the range.

Available in the short wheelbase body style only, the XJR575 sends power through the same 8-speed ZF automatic as other XJs, and liberal use of the throttle should see 0-60mph times as quick as 4.2 seconds (4.4sec to 62mph) and a 186mph top speed. 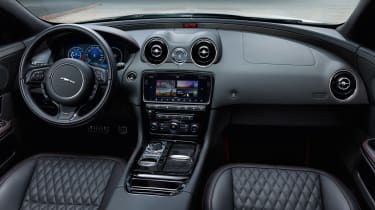 Other XJ power units remain as they were, fronted by a 3-litre V6 turbocharged diesel with 296bhp and just a pound-foot less torque than the XJR575 (albeit developed from 2000rpm), and a 3-litre supercharged petrol V6 putting 335bhp and 332lb ft to the floor. Both are available in both short- and long-wheelbase forms, while the diesel makes its case with a 49.6mpg combined fuel consumption figure.

Externally new XJs can be identified by full LED headlamps with ‘J-blade’ daytime running lights, and on the XJR575 a pair of new paint colours to complement its more aggressive body styling – Satin Corris Grey and Velocity Blue. 20-inch alloy wheels and red-painted brake calipers are standard on the XJR575.

> Jaguar I-Pace - on the road in Jag's electric SUV

XJs use Jaguar’s Advanced Adaptive Dynamics system across the range, adjusting the suspension to suit the driver’s demands and the road conditions, while a new system called ASPC – for All-Surface Progress Control – also joins the spec list with the aim of improving traction in poor weather conditions. Akin to a low-speed cruise control, it works similarly to the All-Terrain Progress Control used in Land Rover products. 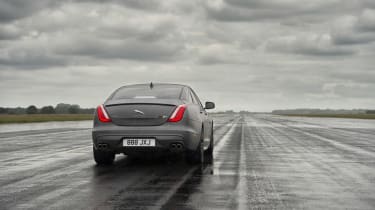 Jaguar has finally installed electric power assistance in the XJ, too. Now used throughout the range, it’s enabled Jaguar to include features like parking assist – but it remains to be seen whether it’s able to replicate the precision and feedback of the existing setup. The XJ is currently one of the best luxury saloons to drive, so the stakes are high.

The basic interior design remains as it was, but Jaguar has made small detail improvements without diminishing the XJ’s ambience, and there’s a large range of materials on offer with which to personalise the cabin. The XJR575 sees unique touches too, with sports seats, 575 branding and unique sill plates, though we’re hoping the cabin feels a little less gloomy than it appears in Jaguar’s images.