Kia performance chief Biermann on the Optima GT: ‘We started from scratch’

After making a strong impression in the hot hatch market, Kia has turned its attention to a sporty saloon 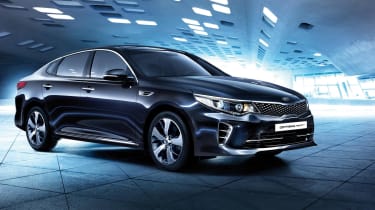 Good things come to those who wait, and if you’ve been patiently waiting for Kia to launch its Optima GT – first unveiled at the Frankfurt motor show in 2015 – then you’ll be getting a much better car than it might otherwise have been.

At an event at Kia and Hyundai’s new test track facilities at Namyang in Korea, head of vehicle testing and high performance development Albert Biermann told evo that his team had basically had to redevelop the Optima GT from scratch, after driving an early prototype.

‘A while back I went to a marketing meeting in Germany and they gave me an Optima to drive there in. We were discussing the brand strategy of the sporty GT models, when someone told me the car I’d driven there in was the Optima GT. I said, “no it isn’t!”

‘Basically, the car was little more than a regular Optima with a more powerful engine. The dual-clutch gearbox was basically standard, so was the chassis, the steering…’

Biermann took the news back to Korea and took the project back to the drawing board. It resulted in something of a culture change within the company: He described problems the engineers were having meeting durability requirements with bump stops when trying to lower the ride height. Previously, the firm would have compromised, kept the standard bump stops and ran a higher ride height. Now? The team is running new stops. 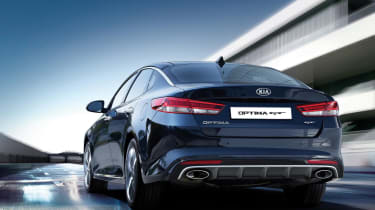 Hyundai and Kia: The new BMW?

This attention to detail is little surprise from Biermann, previously vice president of engineering at BMW M. And he pulls no punches on his previous employers.

‘At Kia and Hyundai I spend more time actually driving and discussing dynamics with engineers than I did with BMW M – there, it was all meetings and arguing about money with accountants.’

He even – whisper it – thinks Kia and Hyundai now have a greater focus on engineering than BMW, an observation he makes with a wistful nod to the firm’s good old days of the 1980s and 1990s.

The engineers working with Biermann also get praise, described as raring to go on new projects and eager to create ever-better cars.

The Optima GT packs a 1998cc turbocharged petrol four-cylinder and six-speed automatic gearbox behind its tiger-nosed grille. The key figures are 242bhp at 6000rpm and a useful 260lb ft of torque between 1350-4000rpm.

No weight details have been revealed, but it’s unlikely to drop below the 1605kg of current high-end diesel Optimas with dual-clutch transmissions, and that’s represented in a 0-62mph time of 7.4 seconds.

It’s no super saloon then, but the new power unit gives the Optima a turn of pace alien to drivers of the diesel, which takes as long as 11sec to hit the same mark in automatic form. A top speed of 149mph gives it longer legs, too – the diesel runs out of motivation at 126mph. 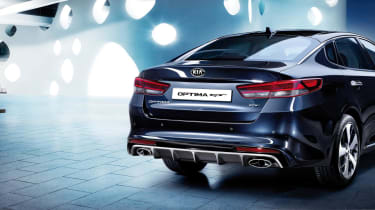 Compatibility with European roads should be assured – the GT receives different suspension settings to the slightly soft standard car, while electronically-controlled dampers should allow drivers to adapt the car’s behaviour to their tastes.

The GT also gets larger disc brakes and a modified version of Kia’s electric power steering system – recently moved to the rack for better feedback.

In terms of styling, the GT prototype rides on 18in alloy wheels and 235/45 R18 tyres – likely Michelins, with Biermann moving Kia away from its native Nexen tyres to the benefit of ride, grip and steering feel.

There’s a deep front spoiler, a prominent grille with satin-finish metal elements, and at the rear a diffuser element and two large oval tailpipes. Kia has revealed little about the cabin, but says it features ‘a more dynamic intent’ than the standard car.

The new Optima range is on sale now with the Optima Sportwagon due soon. These will be followed by the GT, now looking set for a 2017 launch. If the GT is as good as the Kia Proceed GT, there's a lot to look forward to.