Kia Optima CRDi ‘3’ review - a worthy alternative to the mainstream?

Kia’s flagship saloon falls short of being a driver’s car, but still has much to commend it 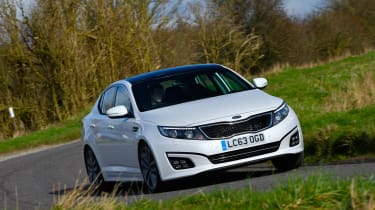 When even Ford and Vauxhall struggle to sell the volumes of traditional large hatchbacks and saloons, cars like Kia’s range-topping Optima are a rare sight indeed.

But should they be? Traditional saloons promise a lower centre of gravity than the crossovers that have slowly replaced them in buyers’ affections, less weight and, with less need to limit inherent body roll, a more satisfying ride and handling balance.

Cars like the Optima also offer similar space and features to more traditional saloons from BMW and Mercedes, yet at a lower price. But could they tempt the keener driver?

The Optima’s specification is understandable given its intended audience, but doesn’t suggest much promise. The one and only engine option available is a 1.7-litre turbodiesel, badged CRDi. 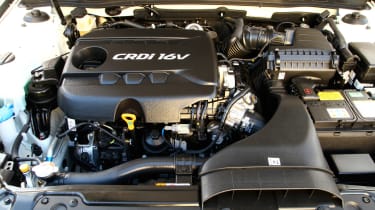 Suspension is by way of MacPherson struts and coil springs at the front, and multi-link with coil springs at the rear. Steering is a rack and pinion setup with electric assistance – variably so, depending on the driving mode selected via a button on the steering wheel. As well as altering steering resistance – reducing it in Sport mode and increasing it in Eco, compared to the standard Normal setting, gearchange points and throttle response also change.

Our car was delivered in ‘Eco’ mode, which in theory resigns the Optima to the laziest throttle response, relatively early gearshift points and ultra-light steering, that on first wiggle appears to lack any connection to the front wheels.

Actually, that sensation persists for the first few degrees of lock. Feedback isn’t forthcoming as you steer further, but the nose does finally begin to respond to your inputs. Things are better in Sport mode, where steering weight increases and the initial slack is reduced, but any semblance of feel is still absent.

The Optima rides well on its 18-inch alloys and body movements are well-controlled, but the Nexen tyres do relinquish grip sooner than you’d infer from their 225mm width. The 1595kg kerb weight doesn't help here, and combined with the lack of turn-in response, the nose never feels too keen to dive into corners.

Driven smoothly and within the chassis’ limitations you can make reasonable and relaxing progress, but there’s little incentive to spring out of bed early on a weekend morning to go for a cross-country blast.

If you did you’d probably wake the neighbours, as the 1.7-litre diesel is surprisingly vocal. It’s exacerbated by the gearbox, which hangs onto ratios longer than you’d expect, even in Eco mode. It seems calibrated to mask the dearth of torque below the 2000rpm peak, and in fairness it works - progress isn’t as tardy as you’d expect given the on-paper acceleration times.

Still, it’s a shame the Optima isn’t offered with one of Kia’s brawnier 2.0 or 2.2-litre diesels. While the Optima's performance is on a par with 1.6-litre TDI Passats and similar, Kia has no answer for the larger 2-litre plus engines found in most rivals. 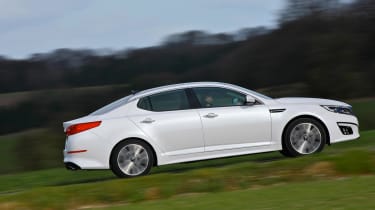 Large family cars aren’t as popular as they once were, but buyers still have plenty of options in the class. Vauxhall’s Insignia leads the sales charts, followed by Ford’s Mondeo and, further behind, cars like the Skoda Superb and Mazda 6.

The Mazda has the best chassis, the keenest diesel engines and the most appealing styling, while the Superb feels the highest-quality, its adaptive suspension yields an excellent ride and handling compromise, and features entertaining petrol engine options.

If your company car budget stretches to £30,000, we’d be tempted to suggest BMW’s 3-Series or a Jaguar XE as an alternative. Performance and economy – and image – are in another league from the Kia.

Our test car sits atop the Optima range, in ‘3’ trim with an automatic transmission. For that, you’ll spend £27,350, perilously close to entry-level models from the premium brands mentioned above. If you’re prepared to sacrifice some of the top-end models equipment and its automatic transmission, Optimas start at £19,995 – and you still get the same engine.

And while its on-paper figures are nothing special, those offered an Optima on their company car list may be pleased to hear that the car seems only too happy to match its official economy figures – we saw around 50mpg commuting to and from the evo office. Throw in Kia's seven-year warranty, and ownership costs should be low.