Unusual but appealing package is frustratingly short of fulfilling its potential 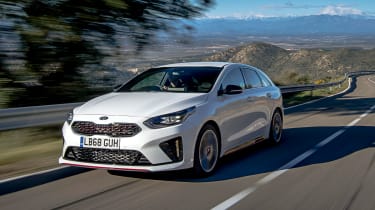 Kia’s compact Ceed range has been expanded in previous generations with a coupe spin-off affixed with the Proceed tag. Now the third-generation version has arrived, but instead of offering a straightforward three-door the new Proceed is best described as a shooting brake. Similar in execution to the Mercedes-Benz CLA Shooting Brake, the Proceed is longer and lower than either the hatch or estate versions of the Ceed but sits on the same wheelbase.

The Proceed has a slimmed-down model line-up compared to other Ceeds, with GT Line and GT Line S models available with petrol or diesel options. At the top of the tree sits this GT model, which is the only Proceed to get a 1.6-litre turbocharged petrol engine offering 201bhp. The Proceed GT is also available with a single transmission option, a seven-speed DCT automatic.

The Proceed’s 1.6-litre unit, in combination with the quick upshifts of the DCT gearbox, allows it to reach 62mph in 7.2sec, a time equal to that of the manual-only Ceed GT hatch despite that car’s 46kg weight advantage, and is competitive amongst key rivals. The torque is evenly spread across the rev range giving linear acceleration, and although the Proceed GT never feels quick enough to be regarded as genuinely hot, the top speed of 140mph is again competitive.

There are hot hatch and estate rivals that offer more power than the Proceed but cost more money too, while similarly priced rivals offer near-identical performance. For anyone preferring an option with a smaller price tag and under 250bhp, the Proceed’s performance and acceleration will be satisfying. 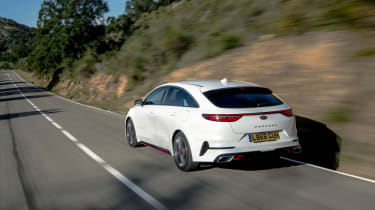 The Proceed GT’s 201bhp and 195lb ft of torque comes from a turbocharged 1.6-litre petrol unit, first seen in the previous-generation Ceed GT models, and in the Proceed bodystyle is mated to a seven-speed DCT transmission only. Maximum torque is available from 1500 to 4500rpm, giving it the feel of a strong naturally aspirated engine, but power begins to drop off beyond 6000rpm. Switching between Normal and Sport driving modes also alters the sound from the exhaust and audio system, and while low-rev resonances catch the ear the sound improves considerably at high revs.

In everyday driving the DCT gearbox shifts smoothly and without fuss, while also avoiding the economy-minded trap of changing up as early as possible. Sport mode engages a more aggressive shift pattern while manual shifting is possible via the gearlever or wheel-mounted paddles. Upshifts are actioned quickly but high-rev downshifts frequently lead to unwelcome pauses that can be distracting, and the transmission never gives complete control to the driver. On balance however it is better suited to all kinds of driving than the clunky manual.

All Ceed body styles that receive the GT treatment have retuned suspension and sit 5mm lower than the standard car. Stiffer front and rear springs have been paired with softer anti-roll bars at both ends, and individual settings unique to the Proceed have been applied to account for the slight changes in weight distribution.

The result is a fine compromise between ride and handling, giving the Proceed the ability to cover challenging roads at pace whilst keeping the driver comfortable and keyed-in to the surface. Road imperfections make their presence felt but don’t disturb, body roll is largely kept in check and the grip available is more than adequate.

The steering has greater weight and is more enjoyable in Sport mode, and while the amount of feedback is relatively limited it responds with speed and accuracy to driver inputs. The Proceed’s natural balance leans towards understeer, but reducing the throttle input will bring the nose into line with little drama. Ultimately the suspension set-up is relatively conservative but there is enough underlying adjustability for it to deliver a satisfying drive. 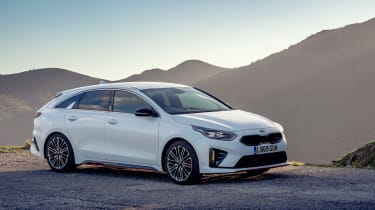 The upside of the 1.6-litre unit being capped at the 201bhp mark is that fuel consumption is kept within acceptable levels. The Proceed’s official WLTP fuel consumption of 39.3mpg with CO2 emissions of 142g/km is impressive for a car of this size and performance, and is significantly better than the Ceed GT hatch thanks to the efficient DCT gearbox. The broad spread of torque helps the driver achieve decent progress with one eye on fuel consumption.

The standard Proceed cabin is typical of Kia’s current range, offering solid if unadventurous design with a generous helping of standard equipment. Getting comfortable is easy, with acceptable head and legroom, although headroom in the rear is marginally reduced on account of the sloping roof. The Proceed GT fares better than regular models thanks to the addition of sports seats, clothed in leather and Alcantara and offering both comfort and support. Flashes of red stitching and silver trim help to lift what is a relatively dark cabin. 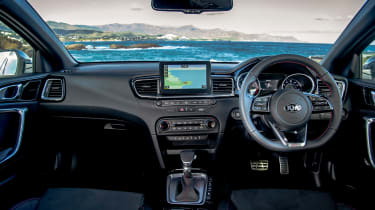 The tech haul is also boosted for the top-spec Proceed GT, adding a smart parking assistance system and a performance display mode to the 4.2-inch screen mounted between the instruments. This is in addition to standard features including an 8-inch touchscreen with navigation, DAB, plus Android Auto and Apple CarPlay. As a higher-specification model the Proceed GT also features the upgraded JBL audio system with additional speakers and wireless mobile phone charging.

Given the Proceed GT’s unusual design it has the potential to be polarising for potential buyers, but the additional details that come with GT spec help to make the most of the shape. The car’s 18-inch alloy wheels with red centre caps, gloss black and chrome detailed bumpers front and rear with red highlights and a deeper rear diffuser with twin tailpipes give a modest dash of sporty aggression but avoid looking over the top.

Ahead of the final examples rolling off the production line this Spring, Bentley has revealed a final-edition Mulsanne
Visit/hyundai/201819/hyundai-i30-fastback-n-versus-the-nurburgring