The Koenigsegg Regera has broken the brand’s own 0-248-0mph record, and it seems an even more impressive accolade is in Koenigsegg’s sights... 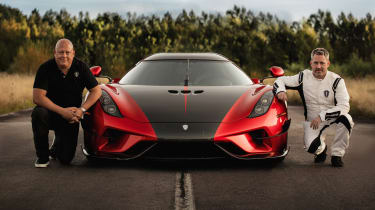 Earlier this month, Bugatti passed the 300mph barrier with a modified Chiron on its test track in Germany, one of the most impressive automotive achievements we’ve seen in decades. It appears this upset the Koenigsegg boffins in Sweden, however, and so the firm has broken its own 0-248-0mph (0-400-0kmh) record with the Regera, just to fill the time before it breaks another, even more spectacular record…

Earlier this month at the Råda airfield in Sweden, Koenigsegg placed factory driver Sonny Persson at the helm of a production Regera (equipped with a roll cage and four point harnesses for safety), before sending it down 2km of tarmac in an attempt to break the previous 0-248-0mph world record set by the Agera RS in 2017.

0-248mph part was achieved in a staggering 22.87secs, a world record in itself, with the car then coming to a stop just 8.62secs later for a total time of 31.49. That’s 1.8 seconds sooner than before. The Regera covered just over 2000m over the course of the run, but engineers say a sub-2km distance would be possible given better conditions.

The Regera features a world-first single-speed, hybrid powertrain, combining a 1084bhp, 5.0-litre supercharged and twin-turbocharged V8 engine to a trio of electric motors. A combined 1479bhp is sent to the wheels through the brand’s patent-pending 'Koenigsegg Direct Drive' system, allowing it to move from standstill to over 250mph without shifting a single gear.

Company founder and CEO, Christian Von Koenigsegg, said: ‘This was a good opportunity to showcase the true capability of the Regera’s one-of-a-kind Direct Drive transmission. As the Regera only has one gear we had to make use of it from standstill to the record top speed of 403 km/h (or 250 mph) limited by rpm. The car reaches its top speed like there is no tomorrow, but then there are no more gears.’

As impressive as this record may be, it seems Koenigsegg has already got another one up its sleeve. At the end of its 0-400-0 video, Koenigsegg factory driver Sonny Persson hints at breaking a record with a model designed with top speed in mind. Could we see the small-scale Swedish manufacturer de-throne Bugatti? Time will tell...