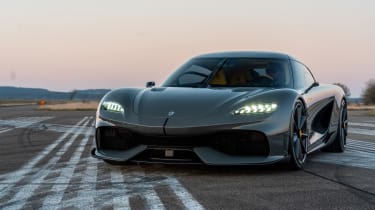 The all-new Koenigsegg Gemera represents not just a new era for the Swedish hypercar manufacturer in terms of powertrain layout and design, but also useability – this is an “everyday” Koenigsegg. Shown here in new photos taken upon its arrival back from Geneva, a four seat configuration, new carbonfibre chassis and an unusual technical layout that differs from pretty much anything in the automotive world, the new Gemera is just as much a technical curiosity as it is a desirable GT.

Starting with the power figure, Koenigsegg’s new layout might diverge from its usual V8 base, but lives up to the reputation with a 1.27 megawatt, or 1700bhp (combined) power figure. Generating that power are a total of three electric motors and an internal combustion engine, combined with a small 16.6kWh lithium ion battery pack that also makes the Gemera a plug-in hybrid.

Two of the electric motors are situated on the rear axle and power each of the rear wheels. Together these motors produce an equivalent power figure of 1100bhp, while the third, smaller electric motor is mounted within the crankcase of the bespoke internal combustion engine.

The internal combustion engine itself, non-ironically named TFG (Tiny Friendly Giant) internally, is all-new and bespoke to Koenigsegg. It’s a 2-litre, three-cylinder twin-turbocharged petrol unit that is dry-sumped, revs to 8500rpm and features infinitely variable valves (Freevalve in Koenigsegg speak) that are hydraulically-actuated rather than driven off the camshaft. Power figures are rated at a peak of 600bhp at 7500rpm, with 412lb ft of torque spread between 2000-6000rpm. 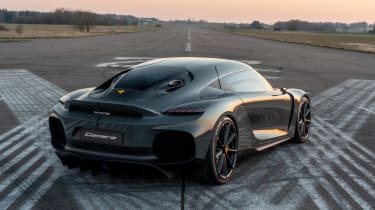 The advantages of the Freevalve system are numerous, but a highlight is how it’s able to augment the twin-turbochargers. Each of the turbochargers are connected to a single valve from each cylinder. What Koenigsegg is able to do is route all the exhaust gases from the three cylinders into one turbocharger at medium-to-high load but low rpm, to get the turbo spinning faster before there is sufficient flow to spin both – a clever, efficient way of improving response, without throwing fuel at the problem (anti-lag anyone?)

The petrol engine and its corresponding electric motor are then driven by the same type of single-speed torque-converter transmission as debuted in the Regera, which relies on its electric motors to provide thrust with far less parasitic losses than a traditional transmission. The twist is that despite being mid-mounted, the combustion engine powers the front wheels, making the Gemera all-wheel drive. Together, these four different propulsion elements fire the Gemera to 62mph in 1.9sec, and Koenigsegg estimates it’ll brush the 250mph mark. 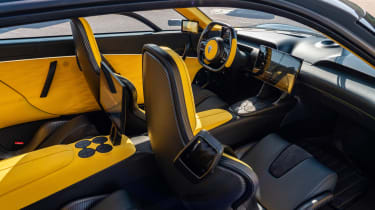 To fit all of this new tech, plus four full-sized seats into the package, Koenigsegg has designed an all-new carbonfibre chassis topped and tailed by aluminum subframes, from which double-wishbone suspension hangs. The dampers are adaptive, and feature hydraulically-adjustable ride adjustment and a nose lift.

The design is based around an entirely new proportion set, but the aesthetics are shared, with a similar wrap-around front screen and side window. The massive doors also open upwards and outwards (Koenigsegg doesn’t do normal doors) revealing an interior dominated by a new floating central infotainment display and dash layout, highlighting the low scuttle and extended interior space.

Prices have not been specified as yet, but like most, if not all Koenigseggs, the Gemera will be well into seven figures. Like it has for much of its existence, Koenigsegg looks to be forging its own path, one that certainly doesn’t favour simplicity for simplicity’s sake.