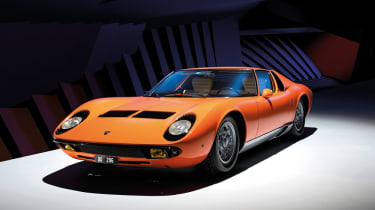 The Lamborghini Miura used in the 1969 film, The Italian Job, is for sale in the UK at Cheshire Classic Cars. Despite the car clearly meeting its maker in the film, it recently emerged that two Miura’s were used. This car is especially rare as it’s the only 1968 model produced in Aranico Orange paired with white leather.

It was driven to the Gran San Fernando pass in Italy by Enzo Morruzi, the factory client manager, where the iconic three-minute intro scene was shot. The Miura winds its way up a mountain pass with Beckerman at the wheel, smoke in hand to the tune of Matt Monroe. Things quickly come to end in a tunnel and the Miura makes a final appearance as its remains are pushed into a ravine by the mafia. 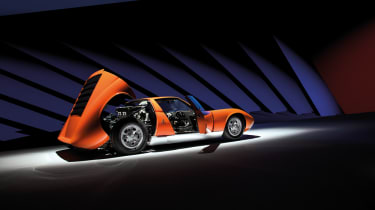 In March this year, Ian Tyrell, owner of Cheshire Classic Cars, received a tip-off that the second Miura had re-surfaced. The car was found in an underground car park in Paris. So how did the Miura disappear? After filming, the car was sold to Lamborghini dealer Zani in July 1968. It is then believed to have changed hands up to four times until 2005 when Norbetto Ferretti the son of the original dealer bought the car. Incredibly, none of the owners had been aware of its role in the movie.

The destroyed Miura was never found, filmmakers searched the ravine for its remains but they had disappeared. Thankfully it wasn’t a full car, just shell painted the same colour. 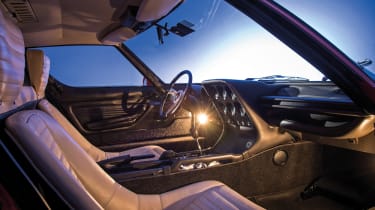 The Miura P400 is rear-wheel drive with a mid-mounted 3.9-litre V12 and a five-speed manual gearbox. Developing 350bhp it can hit 60mph in just 7 seconds. When released it was the fastest production road car available.

Having covered just 11,800 miles this one-off Miura has been checked against Lamborghini build data to ensure its originality. The engine block was replaced due to a crack but the original one is included in the sale.  It has been offered for sale by Mr Tyrell as ‘Price on Application’. Judging by recent prices, expect to pay between £1 and £2 million. 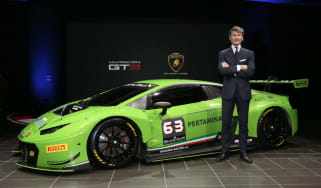