Lamborghini Silhouette: history, review and specs of an icon

The Countach may have always stolen the show, but it was the Silhouette that helped save Lamborghini. 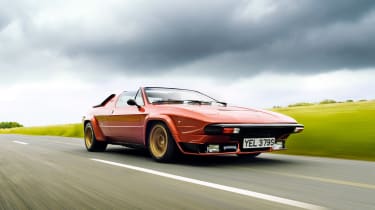 Being completely overshadowed by the more outlandish V12 Countach, the Lamborghini Silhouette was never able to turn heads like its big brother, but that doesn’t mean it was any less crucial to the survival of the Italian supercar maker.

Lamborghini's shortlived V8 lineage is certainly a lesser known branch of the brand's history, and it may not have been as influential in the development of the Lamborghini legend, but it is what kept the company afloat before Chrysler purchased it outright in the 1987. As such, the Lamborghini Silhouette is a car that's well worth revisiting. 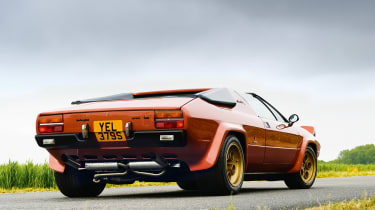 The mid-’70s were not the happiest of times for Lamborghini, and indeed 1977, when this car rolled out of Sant’Agata, was a time of distinct unrest for the whole of Italy. The Left were revolting and there were riots as close to home as Bologna, where one man was shot. Perhaps more pertinent to a manufacturer of supercars (although the genre was still in its infancy) was the oil crisis that had hit sales hard.

With all his companies struggling, Ferruccio Lamborghini had sold his final shares in Automobili Lamborghini in 1974, giving control to Georges-Henri Rossetti and René Leimer. Bob Wallace, Lamborghini’s famous test driver, had also left in 1975. The product line-up consisted of the Countach and the Urraco (of which more in a moment), neither of which was homologated for the huge US market. In short, Lamborghini was a small independent company with something of a cash-flow problem. 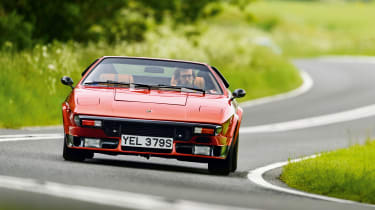 The board of directors looked at the lucrative targa market being exploited by Porsche and Ferrari in America and decided that they needed to add Lamborghini’s first open-top car to the line-up. The obvious car to convert was the Urraco, a 2+2 coupe that had debuted at the Turin motor show in 1970. The Urraco’s shape was created by Lamborghini’s go-to designer, Marcello Gandini at Bertone, while its sheet-steel platform chassis was built in Modena by Marchesi.

This is the only Silhouette known to have been painted the perfectly named Rame Colorado hue; most were Rosso Siviglia (red) or Bianco Labrador (white). This might also be only the third occasion in the history of the motorcar where gold wheels have looked good. In fact, I would go so far as to say that these are not only some of the best gold (the actual colour is Perlgold, which is German for Pearl Gold) wheels, but just some of the best wheels ever. The way the rears dish so deeply is gorgeous and I love the contrast between the overtly curvaceous design of the telephone-dial holes and the straight lines on the rest of the car. Campagnolo might be better known for making iconic components for racing bicycles, but these 15-inch alloys must be some of its best work. 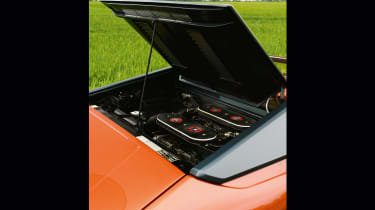 In transformation to Silhouette, Lamborghini transplanted the 3.0-litre transversely mounted V8 which had featured in the Urraco P300. Unlike the previous L240 V8 in the P250 which felt underpowered and strained at higher rpm, the 3.0-litre V8 seems just right somehow; large enough to have decent torque but small enough to rev quickly and sweetly. And that’s exactly how it feels. Crack open the throttle low down in second or third gear and you get instant response that then builds and builds with the revs rising so cleanly and quickly that you feel like it will just keep going. Around 7000rpm is generally the best point to shift up (500rpm before the limiter), but it’s easy to go beyond that if you’re not concentrating because there’s no sense of the V8 tying up.

Despite the open roof, the best place to actually hear the engine is from a following car, or standing at the side of the road. In this day and age of manufactured pops and crackles on overrunning engines, it’s nice to hear the genuine article. The best sound, however, is when the engine is under load. It has the deep growl of a much larger V8 and there’s that slight rawness that you never get with modern cars. If you’re on the verge or pavement as it goes past then there’s something of the low-flying P-51 Mustang about the experience and you can’t help but smile. 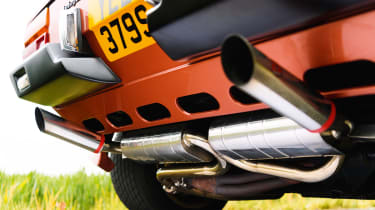 The engine is not without its foibles, though, as the row of spare spark plugs in the engine bay attests. Richard says that Lamborghini decided that the cheaper option of providing a place for spare plugs was preferable to building a better, more reliable engine. Of course, the transverse layout means that it’s easy enough to change the plugs on the rear bank of the V8, but the ones facing the bulkhead are a bit more of a pain to get at. And while we’ve got the louvred cover open, you might notice that the fuel filler cap is under here. For a start, this makes it look like you’ve broken down every time you go to fill up with petrol. It also seems rather inadvisable to have to slosh petrol around quite so near hot metal…

By today’s standards, it’s not quick (although all that traction would no doubt help it get close to its claimed 6.4sec 0-60mph time), but the Silhouette is a very lovely thing. I had expected it to be incredibly cool to look at and then rather flimsily disappointing to drive, but that engine is something else, and I could happily imagine taking a Silhouette on a big trip. 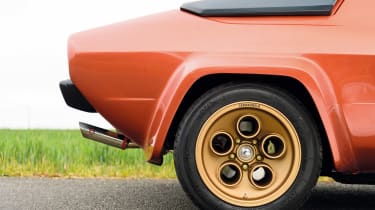 Now, it might seem like a relatively short, even cheap development process to simply lop the roof off a Urraco P300, and in some ways it was, as the Urraco chassis didn’t need much strengthening, but the Silhouette, or P118 as it was known internally, had a crucial difference. The chassis development was masterminded by Gian Paolo Dallara (who was on the board of Lamborghini) and much of the focus was directed towards the new Pirelli P7 tyre. Dallara actually said at the time that the P7 was ‘the greatest single component breakthrough in the history of the car’. The tyre’s new low-profile design allowed a bigger contact patch and larger diameter rims. For comparison, the contemporary LP400 Countach has 215/70 tyres mounted on 14-inch rims at the rear, while the Silhouette (a car much the Countach’s junior) has 285/40 tyres mounted on 15-inch rims.

The distinctive flat-top arches (attached to existing Urraco pressings to save money) were a direct result of the new tyres, as these were not only wider but their low profile also gave the car a significantly different look. Initially the Silhouette, which had MacPherson struts all round, was very sensitive to bump-steer on the new tyres, but modifications were made to the steering arms and the lower suspension arms. The lost ground clearance was also compensated for with spacers above the top mounts. Interestingly, at the same time as Lamborghini and Dallara were developing the Silhouette, they were also creating the BMW M1 around the same P7 tyres (although of a more conservative size). The Silhouette is even named after the Group 5 racing cars Dallara so loved and which the M1 was being designed to compete with. 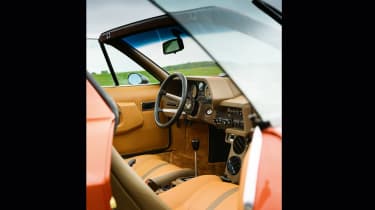 In keeping with the Silhouette’s American market aspirations, Lamborghini put it through some pretty substantial interior upgrades from its Urraco predecessor, all in the aim to appeal to a more comfort orientated buyer. Gone were the fabric covered plastic seats and slabby dashboard, replaced with plush leather and a more contemporary and ergonomic sound instrument cluster.

Unfortunately, like most 1970’s Italian cars, the severely compromised driving position remained, along with the deeply dished steering wheel that attempted to minimise the damage. Storage space was suprisingly adequate however with enough space behind the front seats to store the targa roof. 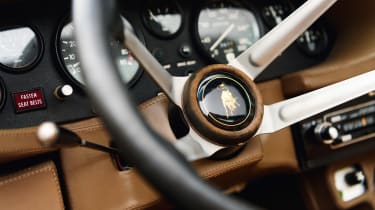